I usually try to post the day of the content I post but Harvey did us in. We had return tickets for Montana scheduled for August 31, simply because it was a date at the end of the month. As the week unfolded, the airports were closed indefinitely so the 31st was just a day on a calendar. As it turned out, late on the 30th, the 31st gathered meaning. Sometimes tomorrow is just tomorrow but sometimes tomorrow is momentous.

On the afternoon of the 31st, the airport would be open for limited operations. No one knew how many flights would make, and, given that it was a holiday, we knew there were no seats for days coming into our small-town airport even if we managed to get out of Houston.

We had to make a decision.

The Houston family is settled. Everyone is safe and dry. We were not completely confident Mom would be OK but we thought she had made it through the hard part. Flooding occurred literally all around her her, but we kept the water out of her house.

After the rain stopped, the street water receded and she could travel within the small quadrant in which her orderly 95-year-old life usually occurs. The live-in caregiver who was with us during the storm was able to go home. The caregiver who was absent from our house during the storm could be with Mom. Tragically, her home is one under water with no soon promise of relief so in a way, being at home at Mom’s was helpful.

We all decided it was time for us to hop on the plane. 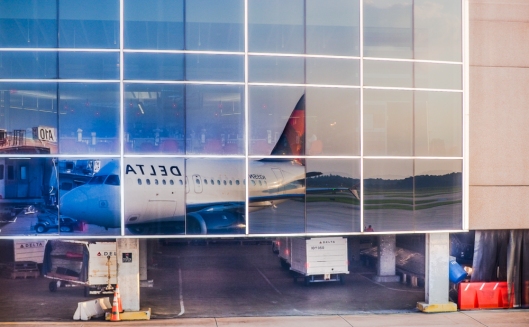 Our Delta jet reflected in the building. Notice the empty interior above and below the plane.

Preparations to leave were less simple than we had expected. All of our clothes had to be washed and dried. My boots had to be thrown away. They were so soaked not even time in the dryer portended to heal them. Sorrowfully I put them in the bags with the other storm trash. A good pair of boots is hard to come by. We left the emergency kit we flew down with that was filled with batteries, lanterns, and other stuff. We departed with one small shared suitcase, two backpacks and our dog who travels with us.

I had driven my tall red rented pick-up truck across a large swath of the city the night before helping with a sick baby but it was dark and I could not see the effect of the storm. On Thursday evening as we drove to the airport, we were astonished at what we saw. We knew from heat maps that many of the places we drove past were flooded but there was almost no evidence of Harvey. The waters had washed everything clean. Close inspection could show a high water line but in many places even that was hard to see.

Where was the evidence of the flood? We could  only guess that there was so much water, and, that it was moving so fast, it took all the trash with it. That happens, for example, with tsunamis. When the water recedes it sucks everything in its path with it. Eventually things are washed back on shore but often in a far distant place from whence they originated. In my mind’s eye I see tree limbs and trash from Aldine-Westfield reappearing downtown on 1-10.

Like the streets, we could see no real evidence of floodwater at the airport but we could see evidence of preparing for Harvey. The parking lots were still  empty. We were struck by the sight of planes tucked between buildings parked nose to tail. I come from a three generation aviation family. I know how much effort it took to park those planes. Kudos to the skilled ones who did it.

The airport was clearly operational but quiet. We made it through all of the pre-flight activities with no crowds although it did take more time than usual since there was limited staff. Gates sat empty. Jet bridges were in place but there were no jets.

Normally bustling with planes, the IAH B gates were deserted

Prior to our flight the online automatized check-in had asked for volunteers due to a possible oversold situation. When the plane departed, there were empty seats from nose to tail, we assume, the product of high water preventing people from getting to the plane.

The flight attendants told us when they came in the plane was full of distressed people trying to reach family members to help. On the way out, the passengers were preternaturally quiet. Perhaps it was the exhaustion. For us, it was also ambiguity about leaving even though we were confident all of our family were in good shape. Nonetheless, we felt subdued and at loose ends as if we were not quite sure we made the right decision to leave.

We set up our big camera to take shots as we departed. As luck would have it, the weather did not cooperate with the photography as there was a strong haze in the air. Although Harvey was to the east of the airport by at least 30 miles, the light was still the funny yellow cast that I associate with tropical storms and hurricanes.

The wind sock hung like it was broken in half by Harvey. 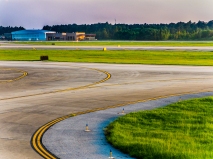 The lanes to the runways were empty after Harvey when IAH commenced limited operations on 8/31/2017.

The days will turn and tomorrow will become increasingly important as people try to move out of shelters, find new places to live, and some will have to finally evacuate to complete repairs. However one faces tomorrow, it is always easier when you have a home than when you don’t. When we lie our heads down in this wildfire replacement house of ours for the one we lost in 2012, we do not forget about how different tomorrow is than it used to be. We pray for a speedy return to mundane tomorrows for all of Harvey’s victims. 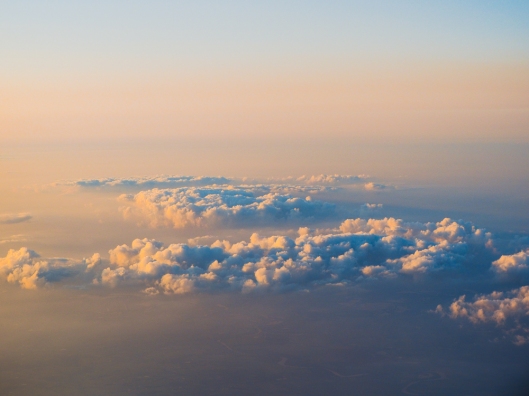