These days I sleep with a tape measure. I had several, strategically located around this temporary home but I wore one out, lost one and have one. Hence the need to sleep with it.

I only have one tape measure. I have 1,000 things to measure.

As decisions are being made about the design and fitting out of the house this dialog is a true constant. “What size should it be?” “I don’t know, I can’t remember what it was.” “Go get a tape measure and see.” Of course, the problem with that dialog is that you cannot measure what is not there. We cannot take the measure of things in our house that burned.

We liked many things about our house. It was homely and not very well built but it liked us and we liked it.

We bought the house when we moved here from New Hampshire for my job. When we found out I had the new job in October, we flew out, met my spouse’s mom and went house hunting. We saw house after house after house all in a couple of days. We were wearing down. We had lived here 25 years earlier and I remembered going to a local landmark egg farm. We decided to take a breather and go see the egg farm. On the way out I was flipping through a house for sale book and spotted a house that was located in the direction we were traveling. I assumed that the ad must have been wrong, it was in the area we wanted to be and we could not afford it and very few houses were for sale there. The agent called right then and we scampered over to see the house. There were people all over the place trying to finish the house. We had to squeeze by on the edge of the hill since the concrete driveway was not dry.

Our house had a sad beginning. It was a dream home for a family who never even saw the house finished. The contractor over-extended and had built a house of cards that, if the stories are true, involved quite a few home and when he went bankrupt all of the financing for all of the houses crumbled. We bought the house from the bank that has repossessed it. We were so eager not to lose the opportunity to have a house where we wanted to live that we made a full price offer and even took the house not completely finished.

We almost did not buy the house. Our house hunt yielded two possible houses that were about $25,000 apart in price. Because there was so much difference in price, we wanted to just sit and think on the choice. We asked for, and received permission to have lunch on the deck of the house. It was a windy but beautiful day. We went back to the first house and looked again. It was the practical decision, it was less expensive, finished, and in an established area. We called my mom for her input she was quick to remind us that we were not suburb types and why were we not recognizing that? With both mothers’ blessing we bought the more expensive house.

When we moved here we left New Hampshire a few days after Christmas and arrived just after the New Year. Upon arrival there there had been some confusion about keys–we had none–so we had to go find a locksmith late in day after having driven 5 days in snowstorms. We finally got into the house and with much gratitude we were looking forward to nice hot baths but discovered we had no hot water. The moving truck was delayed a week because of the snow storm. My mom arrived to help us get settled in and we had no stuff to unpack. We still did not have hot water. We had no appliances either. Right there in January we set up housekeeping with our lawn chairs, Coleman stove, sleeping bags and cold water. And mice. And skunks.

After the bankruptcy, the house stood open without all the windows and doors for months before the bank decided to finish it and sell it. They put windows and doors in place and locked them in October and we moved in in January. If you are a skunk, it makes all the sense in the world to live in a house without windows and no humans. If you are a person putting windows in you would not think about keeping the skunks in the house. If you are a skunk you would wonder what those people were doing to your house. We were just surprised that there were skunks in our house.

We established reasonable boundaries with the skunk family pretty quickly. I guess they were afraid we would spray them or something equally hideous. They kept us at arms length and we did the same. We could always tell when they came home since their fresh fragrance wafted thought the air exchange vents on the stairs. We shared that house with the skunk family until the house died. Skunks lived around 7 years and I know we had two generations of that skunk family with us. I have not seen evidence of them since the fire.

I like to think about them moving back when we do. If I had my old house I would go over with my tape measure and figure out just the right proportions for a skunk-house-under-the-porch. I have the tape measure but not the house to measure. Like so many things, I just have to guess. I am not sure we have built the porch just right for their needs but I think it will do. 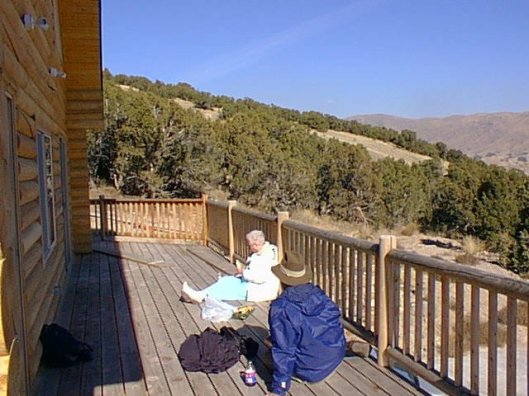