So many things happened today it is hard to know where to begin. I will begin with the continuation of my Alice in Wonderland story from last week.

Today I received a huge set of boxes from UPS. In those boxes were two new chairs and two new benches. I was so excited! When I grew up, and well into our married life we had junk store kitchen chairs. They were functional and some grew to be antiques but they were always creaky. No matter how many times you re-glue a 100 year old chair that has seen hard wear in its 100 years it is going to work loose again. When it does, you can find yourself on the floor at dinner. 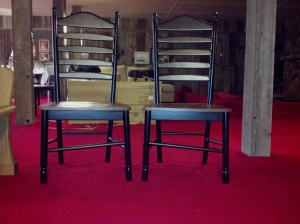 We had a distinguished guest come to do a presentation and who stayed with us for two nights. I carefully prepared a lovely dinner and set an even lovelier table with all of our antiques from so many generations. All was going swimmingly until I saw our guest standing with his legs to the sides and his napkin in the location you would buckle a seat belt. Then I heard a crash. The chair had collapsed. He did not fall to the ground. I was mortified. Turned out that he too came from a family who had creaky old chairs from junk stores and he and his siblings used to play a game to see who could not get dumped by their chair when the glue, or nails or bailing wire or whatever else was holding it together gave way to gravity.

We have always had the “dining room” table but never a family table. The dining room we had for years and years was the one we grew up with. It was a golden oak table that my mom and my dad took out of the trash heap in front of a ladies house. They were creeping around trying not to be seen taking the table in the night when the lady who owned the house opened the door and called out, “Hello, Hello, I have two table leaves that go with that table if you want them.” My dad was mortified my mom was happy to have a table they could afford. It was right after WWII and everything was modern. There was no base to the table so my dad drilled holes in four places in the table and attached black iron legs that formed a triangle. My mom painted the table a black lacquer type finish. It was actually quite smart.

My mom wanted to restore it to its antique form. She did not have money to buy a base. A friend found one for her and she traded the base for 2 books of green stamps, the modern day equivalent are purchase points on credit cards. She restored the table and put the base on it. When she gave it to us years ago she had the two leaves. Problem was over the years the table flexed more and the base was less able to hold up the whole table, particularly if the leaves were in it. Decorum was enforced by the table itself. NO elbows on the table. You could feel it flex in your direction embarrassing you and making you think you might tump the table over and fill your lap up with everyone’s dinner.

After that table, which went to a good home where it would be taken care of, we inherited my mom’s replacement table. It became our replacement table. It cost a boatload. My mom found it for a discount and some sort of trade I don’t know the details of but it was a totally intimidating table. Even with a able cloth and a pad under the cloth it was unthinkable to play cards on it.

So, after all these years I said we were going to get a rock solid table that we could drop stuff on, have life around and not worry about what was happening to the table.

We have a space crunch so our architect recommended putting the table against the wall with a bench tucked under on the wall side. Fantastic. We could just pull it out when we needed it.

I found two benches and two chairs that portended to match the casual style of the family room. It was exciting. Not only would be have chairs and benches for a table we will surely find eventually, they matched and had a style.

I put the benches together first and easy peasy. I was thinking how well they were constructed and they were very nicely packed. I opened the box with two chairs in it. I thought, “Hey, I can do this in no time.” Well, not so. The design and what went where with whom was pretty straightforward. How they went together was not straight forward at all.

I tried again, it fit perfectly if you turned the leg upside down. Both of them. Both of them had to be upside down to work. But, now screwing in the bolts that way. The design at the bottom of the leg was also up on the top of the leg.

All in all, they were not working unless you did an Alice in Wonderland type things and turned one leg upside down and enjoyed the (lack) of symmetry. I honestly don’t know what would happen if you sat on one. I suspect “half a cup, half a cup, could be describe the chairs metaphorically.

Alice, please come to dinner, if you turn half of your chair over and think that is the most reasonable thing in the world surely you will have the knowledge and courage to go through the return process of two chairs that were on sale on the internet.