building a house, dwelling reconstructino, hillwalking, hillwalking in Scotland, planning and design of a house, Scotland

Today I spent the day focused on hills. I spent time working on dealing with the hill our house was built into and will be built into again and I spent time tiring to find a place for us to spend a few days hillwalking in Scotland after we finish our business in Edinburgh.

Both were uphill slogs.

Hillwalking in Scotland would be called mountain climbing or at least hiking in other parts of the world. I was the object of the joke when I learned that perambulating straight up the side of a mountain climbing over rocks and avoiding slipping on scree was walking–Scottish style. Some years have passed since that lesson and I love watching others learn it.

People say they are going to do a walk would you like to go with. “but of course, I love to walks.” “Brilliant, meet us at 4:30 tomorrow so we can get an early start. We might be able to do two Munro.” “4:30? Do you mean am? For a walk?” “Yes, and make sure you bring your waterproofs.”

At this point the unsuspecting and intrepid pleasure walker begins to get a clue that the walk is not quite what they thought it was. The picture with this blog is me ascending on one of the famous, easy hill walks in Scotland–The Mountain Trail which is in the Highlands. It was our first experience hill walking.

On the way up were amazed and happily taking photos to show our friends and family what we “hiked” on. As we reviewed our photos after the hike, there are fewer and fewer of them on the ascent. There are a few snapped at lunch on the top, two as we headed down the crest of the summit where we had eaten lunch and then nothing. By the end of the day we were, as they say where I grew up, dragging tail feathers. Dragging tail feathers is like hill walking if you are from around there. It refers to a tired, despondent or sick chicken or other bird who is sauntering or standing with their feathers dropped as a result of a particularly challenging time. In fact, the last half mile was fraught with blisters and pain from a torn ligament ant that required surgery. The physical therapy had gone well and it was about 18 mounts out but hill walking does no count in months. 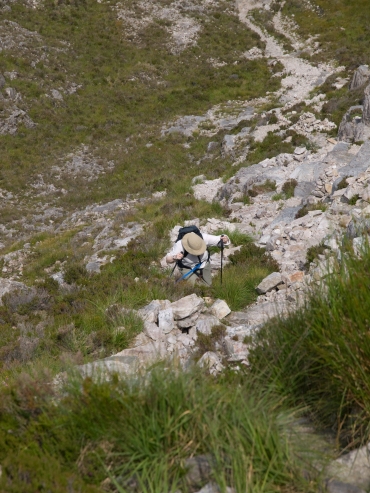 Today was like Scottish Hillwalking. Our paperwork for permission to build our new house is slowly emerging from its arduous hill walk through the recovery, designing and planning stages of the rebuild. Soon we will know if we are able to get to the build of what is euphemistically known as the “dwelling reconstruction.”

The rocks that comprise the surface that makes hillwalking so attractive and so difficult are old hard granite violently thrust from under the surface of the ground when the land as we know it was forming. The land in our part of the Rockies is not like that. It is what is called over thrust. The hard, rock that garnered the Rockies their name is underneath, the softer materials of the creation of the Rockies slid over the top of the hard rock like a hamburger gravy does over mashed potatoes.

Underneath our seemingly soft land is a surface as hard rock. It is the hard rock that I wrestled with for the house today. On our steading, our piece of dirt that is where w are, our place in the world, we have a hole in our hill where our basement and garage used to be. Our basement and garage, as well as the front door need to be in that same hole. For boundary reasons we had to turn the house from an angle on the hill to straight on the hill. When we went out to look at the stakes tonight it looked as odd as a Scottish hill walk in a total white-out fog. You could recognize where you were and important landmarks but could not quite get oriented. After 15 years, and having part of the driveway still in place, I could not figure out where the edge of the house used to be.

Our new house is 4 feet longer and 4 feet wider than our old house was. That does not seem hugely different on paper or in my mind. On the ground I could not recognize where we were.

Like hill walking the house has been more challenging from “ground-truth” than on paper. “Getting the blueprints” and “Getting the permit” are as arduous as a hillwalking.

I have a feeling when we take those few days off the hillwalking will feel very easy indeed by comparison to our rocky “dwelling reconstruction.”