Our days are compressed now as we count down to the grand adventure of the move north. A week ago I arranged my medications so that they were lined up in little weekly boxes so that I could tell how many days were left. I am now down to just over a box and a half.

I am waffling between feeling like I have enough time and feeling like I don’t. Every time that I start to feel like I don’t I go do a task and then I feel happy that we do. The reason I don’t feel so stressed about it is that for the past 20 plus years every time a major event like moving or even a big trip I have been trying to finish some report or another and have as many papers on my desk as I do boxes to be packed. Inevitably I end up working into the wee hours on both and not getting either done well. The invention of what used to be called “air cards” or cell phone internet access freed me so that we could start our trip and I could finish on the road. It was an odd sort of freedom that tied me to the computer working while I was trying to not work.

One spring we headed down to New Mexico on my spouses business. I was tagging along. I had never seen the Grand Canyon so when I saw the turn off and that it was only 30 miles I asked if we could go. My spouse said, sure, let’s do it. We both noted that it was getting late in the day but we were just going to make a quick side trip and take a look to come back later and actually visit. As we drove down the 30 mile road into the park on the North Rim it got darker faster than it should

. Then the snow started. By the time we crept into the the village we knew we could not make it back across the road we came in on since we were in a two wheel drive car. I was getting nervous because of the snow but more than that because I had a grant due. Still, it was the Grand Canyon!

My spouse left me in the car writing on my laptop and went inside the lodge to see if we could get a room. I thought, never, it is a National Park and the rooms will have been booked for months. Amazingly, he returned with a key to a room that sat right over the rim. Not looking at but right on the Grand Canyon. It as a nifty ro

om, all 1950s feeling. We are old enough for that to be nostalgic, not retro, so it was particularly fun.

Being stuck we decided to take advantage of the nearly empty village. I typed and my spouse found out about dinner in the restaurant. He came

back and said it looked good lets go. I said, “let me finish this paragraph.” We out to dinner and enjoyed a short walk in the snow overlooking the Grand Canyon. Of course, it was dark and there are no party lights in the bottom of the canyon so we just had to imagine what it looked like. I was fretting about the grant. We went back to the room and my spouse went to bed and I typed. When the sun came up I was slumped over the computer and was sleeping. My spouse came in all in one big breath saying, “Come look!” I stepped out our door and there in the biting cold stood the Grand Canyon with snow sparkling on its rim and on the trees as they headed down the canyon. The sky was blue and I could not believe how amazing it was. I was so surprised. I had seen photos of the Grand Canyon, probably like everyone has but seeing it in person was like nothing I could have imagined. The blue of the sky, the white of the snow and the red of the canyon simply could not coexist in my mind so I was stunned into silence contemplating the reality of the scene in front of me. But I had not finished the grant. My spouse got a late check out and I turned the computer toward the window that faced the Grand Canyon and typed away. I sent the proposal to our office staff who did the completing and submission of grants from an ancient analog phone in the hotel room. It took forever and back then we did not have many graphics.

I always think of writing that grant overlooking the Grand Canyon. The grant is still at the office where I worked. It was an AmeriCorps program that has grown over the years. Hundreds of AmeriCorps Volunteers have participated in the program. Dental residents donated their hours in exchange for student loan relief.Some members spent two years full time in the program. Over a quarter of a million volunteer hours have been committed to communities across Idaho.  When I consider that legacy time sharing with the Grand Canyon seems like a worth while venture.

Time sharing with work is a curse of this age of Baby Boomers who lived through Post war boom, the Communist Threat, Stagflation with Carter, the Regan years through the years of excess followed by the corporate methodology of downsizing. The companies called it rightsizing. The employees doubled their hours and said nothing because there were 5 people at the door waiting for their jobs. Pagers, cell phones and later wireless arrived making it even easier to carry your office in your pocket and share it with your family in ways that subtracted from all of our lives.

Retired, I am cut loose from those demands. People asked me what I would do. Everyone thought I would be miserable not working long hours and traveling hither thither and yon for work. They did not understand that I have 20 years of sleep to make up for. I have 20 years of visiting with my family that I missed at least half of and I have a mind full of thoughts that have waited to be thought while I wrote papers and reports and grant proposals.

I am not having any trouble adjusting at all. I am so pleased that I am able to focus on our home and our family without being pulled apart by work and family. I did the best I could with balance when I was working but I spent way too much time working on a grant in the living room thinking I was spending time with the family since I was not locked in the office.

We are going home and this time it has my full attention. 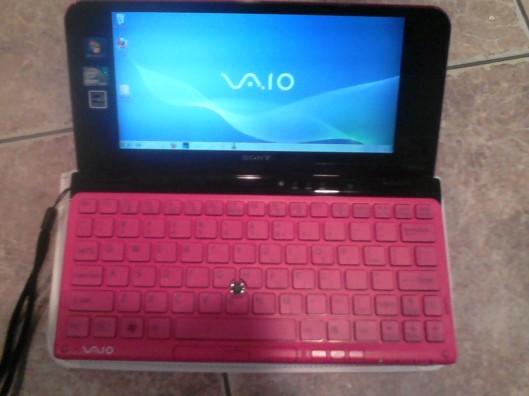 The hunt for the ever smaller computer making it easier to travel with.This one that died in the fire was only a pound and a half. I still like silly pink computers but only if they can draw house plans and help me build my home in my mind so we can build it here on this earth.