Things are changing. This week we are making apointments for next week to work on the house in Montana. It is not “can we get an airplane ticket, shall we drive” but “I can meet you on Thursday. I can just pop over and we can get a cup of coffee and hammer these details out.

Wow. Two days until the movers come to pack, three days before the van leaves with our stuff and four days until we leave with us.

We have a car-top carrier to add to the capacity of the van. I am thinking if we can get it to move forward under all the load we can ditch the moving van and just take the minivan. Who knew. I thought they carried kids to soccer practice and were the object of giggles from others. Ours is quite nice, it is only 7 years old, bright red and on the door there is a ding large enough to be called a dent but it is not because we don’t have to worry about dings. The moral to that story is do not reshape your driveway, put large posts in it and then depart the house in a hurry telling the person on the other end of the phone that you don’t drive talking on the phone. A perfect demonstration of why cell phones and driving do not mix. Being a scientist and all I can generalize from an n of 1, right? It happened to me it must be true for everyone.

But I digress. It has been a big deal trying to decide what should go in the van with us since we won’t see the rest of our stuff for a couple of three weeks.

Here are the things we decided to take from the kitchen. I was struck at one point that these are essentially the same things we came from the hotel to this Green Shag House (GSH). We got more things while we were here but we are partial to some of the things we got earliest. That is not very suspicious, we got them because we were missing them and liked them. So, off we go with the same towels, dishes and spoons we came to the GSH with. We also have new things. We have house-based telephones. We have and iron. We have a lovely wooden tea box into which my tea collection won’t fit. We have a pizza cutter, a saucer pan but the calendar is the one we got at the discount store on Saturday after the fire on Thursday. It was cool, worked well and it folds compactly since it is out of that silicone material. Here is a photo of our picks for the van.

Notice below the sewing machine, another early acquisition that has been amazingly handy. We will add to this pile a box of linens for the bed. We will have a bunch of dog beds (Sophie accumulates them somehow. I have got to stop her using my credit card online!)

We will take minimalist camping gear. I suppose we will have to figure out this tent thing since we don’t know if we have one or two and if two what they are.

And the plastic cups. These cups are the ones that I have written about that we had in the van stuck under the seat left from a camping trip. They were from h\er 8th birthday party. She is in college now. They are some of our prized possessions since they were some of the very few “family heirlooms” we have left. Seriously, we love those cups. 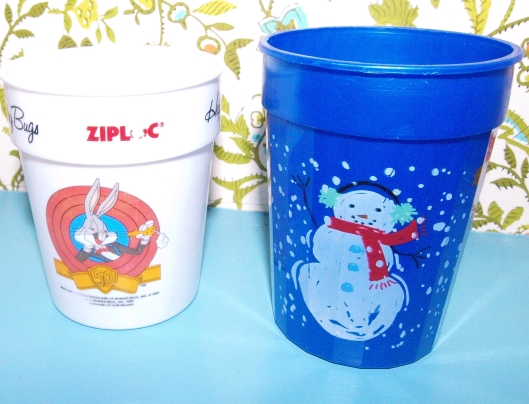 Finally, we are carrying a bottle of water from the old house to the new house. When we evacuated we had three bottles of water. I rationed them for purely sentimental reasons but for transitional objects they have been good even though we don’t drink a lot of the water since itis pretty stale having sat in the closet for a year before they got yanked from the “disaster kit” to go with us. The bottle that is left is the largest one. It was my mom’s that I inherited when she died. I am sure it has pcb or pvc or some other toxin in the plastic but after all these years I am not going to think about it. I am going to take the water to the new house and christen the new house with the water form the old in a water bottle that belong to my Mom who has passed on. The christening will link our old house to new, one phase of our lives to the next and to earlier generations of our family and to the family who will share the water with us.