I love organizers. I look at catalogs and I dream. I imagine how this could be used. What could be kept in that. I think on all of the things that could be neatly stored for easy access. I think of the mess not showing. You can certainly improve the situation but somehow one of those organizers is the keeper of all things unorganized. It is the pit into which all things fall.

Because we have an odd assortment of possessions at this point and because we keep moving, I have a a lot of our stuff in organizers. Some of the first ones we got after the fire are suede baskets. They are really more like an open top box with handles. We found them a few days after the fire at a local overstock reseller. There were three in a set; small, medium and large. There were two sets, one pink and one black. At this point the pink and black distinction has given way to whichever box happens to be handy at the moment so we are no longer split them, or our junk, as girl (pink) and boy (black). I think the final death knell for the girl/boy thing was brought about by a hoard of computer and electronics cords. In the old days you would have said right off that it was a boy box but these days electronic cables seem to be gender neutral.

I am not neutral about “the” unorganized organizer box even thought I have no clue what gender it is. I only know that I had one before the fire. I had one as soon as we had anything again and I still have one. Before the fire I thought I had trouble cleaning it up because I had so many things. I would go through the box like an archaeological dig removing layer after layer. As I descended layers I struggled to remember what some of the things I found were and what the story they told was. I gave up long ago trying to figure out how something got into the box. We have more stuff now but between the fire and now we had less stuff. For a long while a lot less stuff. I still had the unorganized organizer box. I still managed never to get to the bottom of the box when I was reorganizing.

I actually brought one of the unorganized organizer baskets with us when we left the fire. It had our prescription medications and a whole lot of other junk including a straw and a miniature camera tripod that went to the kind of camera that cell phone cameras have replaced. There was also a sapphire bracelet I inherited from my grandmother and only wear when we go on cruises (twice).

I have gone through the box several times in the months since the fire but I still don’t know how to get all the stuff that was in there organized. I think it just stays there and it tells the tale it tells.

Tonight we were talking about packing and how much we have left to do. At this point I think all I have succeeded in doing is making a mess while I was trying to get organized. I pulled out the sheets that are not on the bed, rounded up the two towels that are not in service. I rooted out a large stack of placements that got here somehow. I thought I brought a few but I did not expect that I had enough to invite 29 people to dinner.

When we came here we brought a kitchen box for ourselves. We had our favorite pot and our egg pan which does duty to make pancakes (one at a time), saute boneless, skinless chicken breasts or make an omelet. I brought all of my knives. After the fire I scoured the internet and found a nice set on sale. We also brought plates, bowls and mugs in service for 4. We brought 4 forks, 8 spoons, and 4 knives. We brought plastic leftover storage containers which should not be confused with organizer containers. Leftover storage containers serve a function that is identifiable, they store leftovers until you remember to eat them or until they are removed because they look like a science experiment.  We brought kitchen scissors and hot pads. There are dishtowels and a wine opener. Usually you don’t find great kitchen equipment in a rental place but this is a cook’s kitchen. Separating ours from theirs has created a mess. It is good that I have drawer organizers to keep our stuff segregated from theirs.

There is at least one organizer that tells tales. They tell tales of a person’s life and of what was left over. In the organizer box on my desk tonight you can find an amazing collection of things. In my box I found a box of Kleenex. They were in the organizer box not because they needed a box to be organized but because that was the only space I could find to put their box. Under the Kleenex box comes a layer of zip locks holding paint chips, spare buttons and aspirin that I had chucked into a back pack and then when I dragged it out there they were. There is a layer of to-do lists I cannot remember if they got to-done. Below that is a layer hang tags from new clothes and stickers from my organizational scheme for cataloging all of the purchases for the house.

Dig a bit deeper and there is a set of ear buds (I’d been looking for those!). In there is a  little patterned zipper case I bought in Indonesia years ago that holds my memory foam eye shades for international travel. No clear clue as to how those got in there but I am guessing they got tossed from my backpack along with the Ziploc full of Tylenol. You can find chalk and you can find pencils. There are a few pens and a few pins. There is loose change. There are all sorts of over the counter pills that spilled out of another Ziploc. Two really cool things are there. I found $40 and behold, there are two small cans of bear spray!

Don’t ask me why I think I need bear spray on my desk in a 2nd story condo in town. Granted this is a small town but I think bunnies and deer are far more likely to pass by my desk than bears. 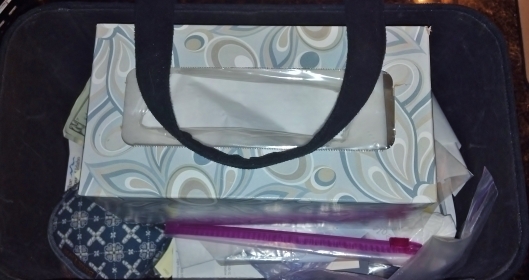