The day had an inauspicious beginning. It began with a bout of my mysterious morning sickness that could not even presage the birth of an elephant for as long as this has been going on. It took me a bit of time to get my act together but when I did I managed a house-details email chore list of daunting proportions in only an hour. I tidied up the one-bedroom suite at the Hilton Homewood Suites hotel where we are staying. My spouse went to town, paid bills in person, picked up a few building supplies and then we proceeded to the warehouses we have for our building stuff.

When we pulled up to the warehouses there was a large pallet I was expecting and a smaller but still large box I was not expecting sitting on top of the pallet. All were clearly frozen to the ground. When I got over to inspect what was there, the large box was a dishwasher. The pallet contained a shower base and glass doors. These boxes has FRAGILE, DO NOT STACK stickers all over them. I suppose the dishwasher delivery company driver did not recognize a fragile sign. Luckily, the shower base and the glass doors seem in good repair.

Prying from the grips of the January thaw snow that freezes into solid ice at night was a prime opportunity for disaster. There we stood, ever so delicately balanced on the pavement that was covered with 2 inches of black ice, leaning over a pallet frozen into the black ice, trying to wrest the shower base from between the ground and the dishwasher. This required opening the pallet and we did not have tools. After some struggle of one trying and the other commenting At first we tried alone with the other commenting on methodology. Then we came onto the amazing idea of prying together! One, two, three….one, two, three….most came loose. The last held on for dear life. I suppose that pallet brace was invested with the task of keeping the shower parts tucked inside of the pallet and it was going to hold on until the bitter end. Being respectful of the pallet’s bitter end and our own ends not being on the ground, we decided to pull from the other side. Poof! One tiny tug and it came loose. All our tugging had loosened the opposite end.

From there we stopped by the tile store and sorted out the shower shelves. It was a great moment, the shelves are going to cost less than we budgeted which is good since everything else is on or above budget.

After frozen pallets and tile came a Subway lunch which was soon followed by more building supply sorting and heading up to the house to deliver the shower base and a few other things.

The drive from town out to the house is peaceful in the winter. There is not a lot of traffic and the evergreen trees stand straight and tall decorated with snow that is slowly receding with the January thaw but promises to return this weekend. For now the highway is free of ice and snow and the 1 1/2 mile road to our house is snow-covered but plowed well.

The warm weather has helped with the construction of the house. The roof is about 20% sheathed today. The inside of the house is changing character as the walls and the roof are closing in. The house is showing me what she will be.

The front rooms of the house have carefully placed windows to catch the sunlight in this often gray-light area. The windows are placed to capture the low-in-the sky winter sun bringing in as much warmth through solar gain as they can. In the summer when the sun is at a higher angle, the roof overhang protects most of the windows from direct sun. On the main floor and on the upper loft-floor the front half of the house is resplendent with light. In back half of the house reside the bedrooms and the den. These area are more sheltered from that light flooding in giving them a peaceful, gentler feeling. Walking from the front to the back of the house one feels folded into the house like being taken into the shelter of a loved-one’s arms.

I have felt this transition from public to private space over and over. I designed the house to have that line of demarcation but until you walk it and see it, you are not sure it will actually be there. How can you build an emotional line? How do you say, this is a energetic space and on this side of the line it is a regenerative space? The energetic space, the public space is shared space and is filled with the the transfer of thoughts and feelings from one to another. Regenerative space, private space is for creating and savoring those thoughts and feelings.

I have not yet slept in my house but I know it will be a gentle place. It will show us the forest through a two-story window on one side. It will show us the sun and the mountains running the ridge of the Rockies as they wend their way and blend with other mountains until they reach Patagonia in South America. The skylights will let us see the snowflakes and the rain drops alike when they descend to be with us. The quiet corners in the house will succor us and encourage us to read and to contemplate. The kitchen will be filled with forest-filtered sunlight and there will be tea and with laughter. The den will bring close people who care about each other. The dining table is one where life happens. Ten people can sit around it and drink coffee, tea or lemonade and plot the perfection of the world order. For us, our private space is upstairs i in the back of the house. It is a small room by most master bedroom standards, 12 1/2 feet by 14 feet. It is just right for us. It is a sheltering and snug place.

My house comforts me. We will make it a home that comforts all who enter. 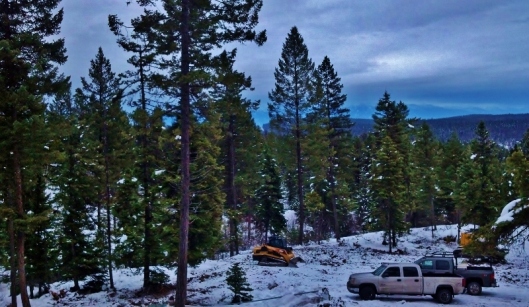