Chrystler minivan, driving in bad road conditions, getting stuck in the snow, minivan

Tonight I went for an ice cream run. It went rather slowly since the roads are rough and bumpy from the freeze-thaws we are having here in January. As I was driving back with broccoli and Bryers ice cream accompanied by organic cookies for the dog, I thought about how I could describe the driving conditions. I decided it was like a hockey rink with golf divots taken out of it.

After I turned off the mostly clear highway I concentrated on bumping and jogging my way though the holes lumbering from dry pavement to clear ice patches that were several inches thick to the evidence of the snow before it became ice. Sophie was in the back seat rolling too and fro like we were on a ship.

When I turned into the not-yet-developed area of the development where we are living now, I relaxed a bit. The road, even though winding, is dead flat. The speed limit is 25 miles and hour and in the dark night across the empty space, you can see someone coming from a mile away. I gazed up from the road in front of me and saw the most gorgeous moon. I knew it was up there but was still surprised when I saw how gorgeous she was. A little bit of my concentration on ice cream and ice slipped away replaced by an elegant moon adorned in a sheer organza tippet.

It is moments like this that bring us head-up into awareness of what our world can show us. Beauty can reach out and touch us on the shoulder and walk away leaving the moment where we stand changed.

A little while earlier I had been in the parking lot putting the groceries and Sophie into the car. I looked as the side of the van and laughed. I was so amused I took out my cell phone and took two pictures to share in this blog tonight. The ice cream (with the broccoli) was sitting in the front seat in a heap and Sophie was in the back looking very strangely at me taking pictures of the car in the dark.

We have written about our beloved red Subaru and its successor, our loved but not so healthy white Subaru. We have not written about our Chrysler minivan that I think of as a red whale walling down the road. My husband loves his van. Our best friend has one a couple of years older and both men think their minivans are the best. I truly appreciate the amount of stuff you can haul in them. I also appreciate that you can get up and walk from the front seat to the back with more room than you have in a toilet on a train. I appreciate the amount of sloth you can have when you go camping with a minivan. Everything goes. There is room for it.

Our red minivan is pushing 10 years old and has less than 60,000 miles on it. It has a dent in the side of it. I don’t drive the minivan. I drive the Subaru. You can park a Subaru inside of a minivan. A couple of years ago the Subaru was in the shop and I was left with the minivan to drive. A relative called me upset about another relative. I did all the things one does to be helpful. Listen, soothe, offer unhelpful advice and avoid going, “What! really, ewww.” when you hear what the other relative did. I don’t remember the call so much as I remember feeling very pressed to get to work and saying multiple times, “I am so sorry, I really have to go.” As the call continued I gathered myself and got into the car and did something I don’t believe in, I kept talking while I started driving. I said, “I am pulling out of the driveway now, I have to get off the,” WHACK “phone.”

It cost more to fix the car than the car was worth so we just ride around with a big dent. It is not too deep so you could imagine it was just the way the light was reflecting. I still view the minivan with a bit of reserved suspicion as if it is going to get mad at me for whacking it on the post outside of the house.

While I have a tenuous relationship with our minivan, my spouse and the minivan have a pact. When it starts to snow they both pretend that the minivan is a 4 x 4. My spouse liked to have the room to haul packages for his antiques business and the minivan once told me it liked to be able to get out and not be locked in the garage.

This week the weather has been warm again so we were taking the opportunity to use the larger minivan to ferry things to the new house. Our driveway is daunting. It won’t be flat when the house is finished but for now it is construction driveway that goes straight up and the plowing method is to run a bunch of crew cab trucks up the road and flatten it out. When we try to follow in the Subaru we do OK as long as we don’t fall into one particular hole from whence we would never emerge. The minivan was amazing. Up it went like a whale waggling its tail to steam from the Gulf of Mexico to the Arctic waters of the north. Every time I would start to think we were reaching the critical point, the van would slide back the other way. Up and back my spouse drove ferrying things. Just as the light was fading on Friday night he came into the house where our contractor and I were and asked if he had a chain. There was a chain and a big crew cab truck but  no place to hook a tow chain on a minivan out of the snow.

While the men discussed options, I got down on my knees and assayed the situation. On the back right corner by the bumper was a big rock that was preventing the minivan from hitting the big tree right by the big rock. The front left wheel was not quite touching the ground. The front right wheel was sitting pretty high and dry on a pile of rock and snow. I got on my hands and knees to dig out the rock and ice under the wheel hoping that it would allow the car to get a bite so it could move forward those critical 10 inches from being stuck to being unstuck. I moved four or five, 2 foott in diameter rocks. I did not move them far, but I got them from under the car. I also got really muddy.

So tonight when I went for an ice cream run I approached the mini with more respect than in the past. It is not just a wallowing whale, it is a whale with mountain climbing skills. It was with that confidence that I looked up from the icy, golf divot filled hockey rink road to see the moon. 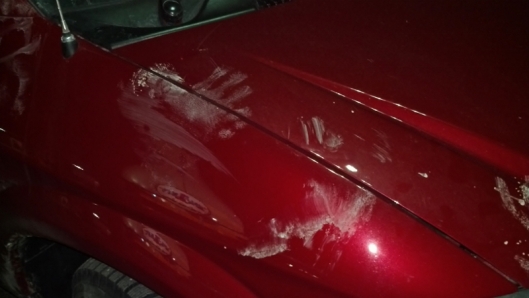 The evidence if getting stuck in the snow and then having to dig out through the snow into the dirt to get out. 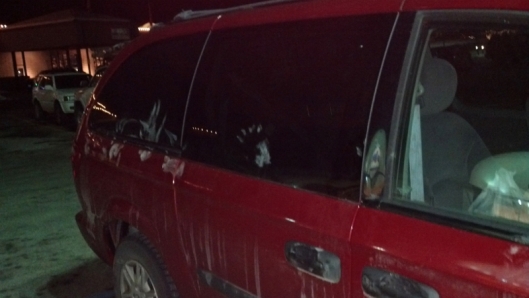 You can see I first tried to push the car back down the hill. The next push, the successful one was pushing the car up the hill.