I have been working on the house for hours with a short break for a little crime and dinner. I have lists that have lists that have lists all of which are inventoried and most of which have 3D graphics that go with them. I honestly don’t know how else I could do this job of spinning off of a total loss claim when our house and all the thigns in it burned down to a house that was started and then not finished to a new house that is different but to which we are bringing things from the previous not built house which was the replacement house for the one that burned. I understand the crime shows and their convoluted layers of causes leading to obsession.

When I was in graduate school one of my proefssors used to tell this the (in)famous story of a professor at Berkeley who said, “Bring me any result in within 24 hours I will have a cause for you.” Of course, the cause and the obsessive need to impose order on chaos led her to create something we needed to hear. My lists are like that. I cannot, not impose order on them.

In my mind my order is helpful. In realty I am not sure if it is or not. I am happy to answer questions and bring people pieces of paper that get dropped on the job because our fingers are cold. They fall into the snow that is damp and then one of the dogs trots by and the stove specs are now paw prints. I had it in m

y mind that people should be able to quickly access anything they needed from my (obsessively) organized cloud computing site.

I don’t know if anyone will ever use it but the organization of it is glorious. The directory starts with “Finishes” meaning all the things that are the finishing part of the house, not the rough part (the 2x4s). You can find files on the Dumbwaiter or the plumbing and everything else in between. Then it rapidly devolves into something useful. Not sure if it is useful for my need to impose order or the people working with me but that can be said about any endeavor.

After you pick the category–today it was plumbing–you go to the room you are seeking. I will use the cruise ship as the example of my obsessive need to impose order.

At the next step, you find the types of things that are in the room.  Viola! you have instant access to the specs for the sink in the bathroom, or whatever it is you need. 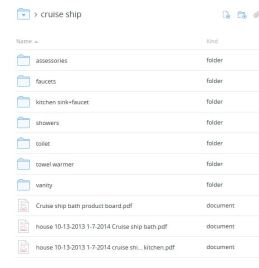 In my real life, all of the fixtures and fitting that are so neatly organized on paper are not so organized. Still, there is more order than there was. We spent this weekend imposing order on our physical world reality by tucking all of the nuts and bolts and diverters and light bulbs for each room into 50 gallon totes.

When we are able to tote those totes from the warehouse to our house maybe my obsession with imposing order will be sated. I think once I have things attached to walls or sitting in their place on the floor the worry that they will disappear will be removed. If I can grasp that I have a home again and that it has plumbing and chairs, I won’t need the lists anymore.