The game of golf is highly regulated with precise rules. The rules further have the judge’s rulings on them over the years. There are also local rules. Local rules override PGA golf rules and for good reason. They are about what the locals know, not the big-wig visitors from the city.

If you live in Africa and you hit out ball into a water hazard and there is a water buffalo in there with it, you get a free drop.

Today we spent hours putting a coat of primer on the walls in the cruise ship. It was long and tedious. The walls are tall, there are 10 foot ceilings. There are multiple twists and turns of the walls so cutting in to paint the rest with a roller is a painfully time consuming endeavor. 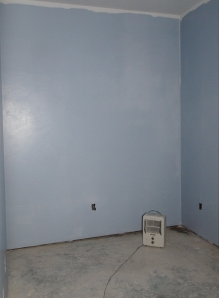 After getting a coat of primer on the walls and the ceiling, we staggered back to the condo where we are staying stopping off for some takeout local barbeque. We planned to have dinner and then go back and paint where the kitchen wall cabinets need to be hung before Monday at 7 am. After we finished eating only one of us is awake. I drew the short straw for the evening. My spouse drew it for the day. He painted the ceiling and spent hours on the ladder painting the corner between the ceiling and the walls. I had it easy. I was painting down below where I could sit. Tonight I drew the “you get to paint alone on this one” sticker.

Off Sophie and I went to put paint over the primer. It should have been exciting to finally see the paint going on our new house but it was work and we focused on that. I painted and Sophie snored. I did spend time contemplating the color for the rooms and decided I liked them. Everything but the bedroom is a grey-blue that is a fairly strong color but restful too. The bedroom coffee with milk. The ceiling was to be Swiss coffee but at this point we have decided that the primer makes a great ceiling color for now.

Our garage doors in are in Spokane waiting for something I cannot fathom since I already paid for them. For now you can just walk into the garage. The entry door to the family entrance where the cruise ship is located are not installed. The Cruise Ship door is not installed. There is a nice bit of opaque house wrap nailed to the wall on one side with an opening held shut by a piece of dry wall resting against the house wrap. With drywall taping and mud followed by painting, heat is important in that area. To keep the temperature boosted to at least 50, there are three space heaters going. Two are silent but one puts up quite a rowdy roar with a squealing fan.

As I was painting along tonight I was thinking about our local rules. In our neighborhood, as is common in most neighborhoods west of our town, walking around the block means carrying bear spray. We have neighborhood handouts on how to survive bear and mountain lion attacks. With bears you try to appear insignificant, a mere speck on the vast landscape of the life. With mountain lions you are supposed to loom larger than life. I practice these thoughts in my head sometime for I am sure that under pressure, without proper training, a person (me) could get confused.

So tonight when I heard something over the squealing fan in the rowdy heater, I wondered if I should poke my head out of the house wrap to see what was out there. I looked at my dog. Surely she would sound the alarm if I should be alarmed. She was dead to the world covered in dry wall dust breathing some sort of nasty particulates, no doubt.

I heard the noise again and stopped to listen. Maybe it was just the wind come up. I thought about turning off the heater but then decided if it was a mountain lion ranging around in my garage that has no doors I would do well to throw the noisy heater at it. If it was a bear he could throw me on the heater and toast me to a nice golden brown all the while enjoying a nice carpaccio of dog for an appetizer.

I stood, a little nervous but a lot aware, waiting for whatever it was to pop its head into the house wrap that was “locked” shut by a leftover piece of drywall. As I type this now I don’t know why I did not expect Jack Nicholas “Here’s Johnny” from the Shinning.

In the end it must have been a gust of wind. I finished painting all but the bedroom of the Cruise Ship. This is the first paint I have put to a wall in 19 months. I spent the evening painting my very own walls contemplating local rules.

If a bear or mountain lion determine that they want to paint your house local rules specify that they must be allowed to do that. After painting all day and into the night, I was tired enough to let them.