Within a few hours I will be fully committed to living in our new home. It is a beta edition, of sorts. It is too good to keep on the programmers desk but it is far too raw to be counted as an edition with a decimal. It is not moving_home.1.

My spouse is out of town at a meeting and I cannot continue to live in another hotel since it is very expensive and I just cannot do it. We have been in this Homewood Suites 10 days, added to the week after New Years and nearly a week in May it almost matches the Marriott stay the month after the fire. Putting all of the non-longer term stays together for the past 20.13 months–604 days–we have lived in hotels or with family for 88 days. We have spent 15% of the past year and three fourths being very brave.

I don’t say be are brave because we are heroic or anything like that. I say we were brave because we kept going. Anyone who keeps going in the face of a major life event like illness, divorce, death, disaster, civil violence, war of any other manner of negative stressful events that can befall human kind must draw on bravery to keep going.

It does not mean we were brave every day, or even parts of some days. Even as recently as last week both of us had lapses of bravery. The physical side of work with this impending move has been brutal. The psychological is as expected–kind of unpredictably odd. Both of our moments of anguish have come independently in one of our warehouses. My spouse’s moment was caused by a cascade of boxes that had been stacked precariously while we were looking for a 3 1/2 inch sink drain. My moment came when I pulled out of the warehouse Sophie’s dog place mat and a somewhat ratty blue plastic bow that was delivered to us, quietly, via the hotel front desk by a colleague and her dog a day after the fire. Each move it is one of the first things we put out for her. She has been without it this hotel stay. Sophie was watching me move things around in the warehouse and I looked at her and said, “Lookie, it is your water bowl. Soon we can take it to your forever home.”

I could not stop crying. The analogy to the rescue dogs looking for a forever home was too strong. One of our strong supporters during these past many days, Kate, once called this our forever home. It hit me then but nothing like now. 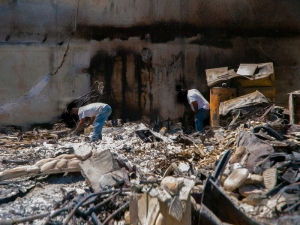 Demolition of our old home, searching for anything salvageable.We found two or three small things from among a whole household.

So monetarily I will leave behind this bowl of plain non-fat yoghurt which is all I have left to eat before we move and start loading the car. We will be moving into the tiny basement apartment known as the Cruise Ship.  It is hardly ready. There is plumbing and there is electricity but the bed is in pieces on the floor and the closet racks neatly stacked in the corner of the closet need to be put up. The whole thing needs baseboards but we don’t have them. The furniture is mostly there but some of it was box-store specials that have deteriorated through the moves even before they could be used. The dishwasher does not sit right and the counter bows. The pot-rack is crooked and the curtains are either not there or not right. And, of course, the entire house is unfinished. Upstairs we are at the ceiling and mudding stage but no floors, bathrooms, decks, kitchen, etc.

I would like to say that all of the mess is just fine. Who cares? I care. More than I thought. In my mind I thought I would have moved into any mess or even no bed or less. Surprisingly I have discovered it is important how finished things are. I guess that need for order arises for the disorder or the past 608 days.

Regardless of whether or not I want order, I am not going to get it. Once there I can keep working on it and a small 390 sq ft of our lives can come togehter. I will continue to be brave and stay the course. It is Moving Home the Beta Edition.