There was a huge amount of activity at the house today. Floors were being put down, frames put up and cabinets arriving. I was in the middle taking photos and watching. I was also getting in the way. I had promised to avoid doing that. I said, “I will go now, I don’t want to be in the way.” I turned and headed for the stairs, not the ones down to the basement apartment where we live now, but up where our bedroom will be.

I realized immediately that I had gotten confused and made the micro adjustment to point to down stairs rather than up but it was a cool moment. I have been worried that we would have a hard time transitioning from the Cruise Ship, our little 390 sq ft basement apartment under the “big house” upstairs to the big house itself.

We spend time “upstairs” but somehow I was feeling funny about moving from the comfortable tininess of our Cruise Ship to the overwhelming place above. It is a large house but not anywhere near as large as most of the suburb homes in the US. Still, being 2 feet wider plus the kitchen bump out makes it larger than our old house, and having the Cruise Ship below, it feels huge.

Today, after that momentary missed beat, I could see a transition. It has been good I think for us to live in this little space. We rattled around in that first temporary house we had with its 6,000 sq ft. I never did feel connected in any way to that place other than the master bedroom which was the size of one or our old houses. It is a lot larger than the Cruise Ship apartment where we live now. The hotels were always hotels. The family houses we stayed in were welcoming and wonderful but always another family member’s house. The condo, especially since we moved in and out depending on the family’s holiday schedule, felt like theirs. We felt most at home there but it was like living in a ski condo you had taken out for the season, not like a home.

Moving to this little space in our own house, right behind the garage and beside the stairs to the main floor of the house has been a good transition. It has been like being in an incubator. I had been thinking over the past couple of weeks as we see the house moving closer and closer to completion that the transition from down here where we had finally come home and been safe to up there where we are not quite known yet was going to be bumpy.

I was comfortably reassured today by what could have been interpreted as a Senior Moment. 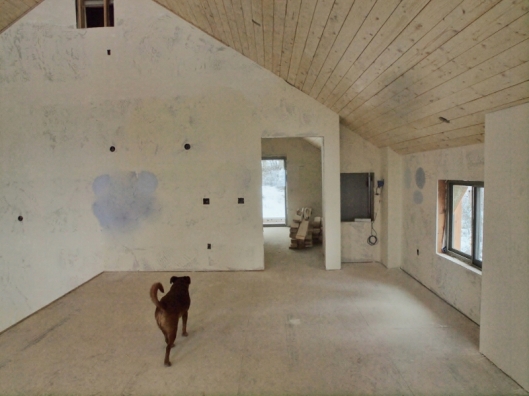