It is raining again. More mud. Mud. Mud. I put Sophie out on her 40 ft lead so she could wander around in front of the garage door where I was working. Every few minutes she started whining for me to come untangle her. There are so many boards, planks, pieces of plywood and wooden pallets that any one, and especially a dog sniffing the ground, would get tangled.

She does not go off lead that much since she is a hound and loves to check every smell in the universe. Her nose rules. At the old house sometimes we would go up behind the house where there were some trails. On occasion we would encounter groups of deer. Sophie would have her nose to the ground sniffing with gusto while the deer themselves stood no more than 100 feet from where she was. 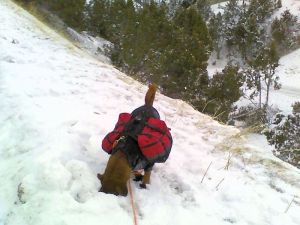 Sophie never found a bit of now that she did not want to sniff.

Sniffing about examining the world is a good thing to do. She reminds me of that. Sophie also reminds me to lift my head once in a while so I don’t get tangled up or miss entirely the actual thing rather than just the smell.