Today was a strange day split between work from my old professional life and plumbing.

As an academic researcher part of the expectations of my job were to produce new research and publish the results. Since retiring I have spent more time thinking about plumbing and writing this blog than about writing scholarly journal articles. One of the reasons I retired was because of the chronic pressure of “publish or perish” and in the current academic climate of “get another grant or perish.” I logged my time in the research grant saddle and churned out books and papers. Occasionally, on days like today, something about my research surfaces. Today it was about statistical categorization. How do we categorize information in the fewest possible groups without losing information because we put too many things in the category. It was a stretch to remember what those were and even a greater stretch to produce a coherent answer on the topic.

This morning I set out to get an early start working on the final round of cabinets. I just have the pantry left to go so it is pretty exciting to think that soon I won’t be washing Madonna Blue out of my brushes and my clothes and even out of my hair where it tends to accumulate as I crawl around working inside of cabinets surrounded by wet paint. As it turned out an email set me on statistical categories until nearly two this afternoon. It was both interesting to think about statical categorization again and stressful since we had an appraiser coming at 4:00 pm and I had things to do before the visit.

Between statistical categorization and preparing for the appraiser I was looking for plumbing parts, again. The electricians like to have all of their fixtures collected and sitting neatly together in boxes. The plumbers like to have what they need when they need it. If the toilet is going to be installed on the 21st, they don’t want it to arrive on the 10th. If you have read any of this blog you probably remember that we moved to Montana with a lot of plumbing parts that were originally for the house in Idaho we did not build. Along the way a lot of plumbing parts mysteriously departed.

The past week or so we have scoured the universe looking for our pot filler still in the box. Over the past few months we have secreted plumbing things from our warehouses to the house and hidden it so that when the plumber wanted it we could say, “Ah, here it is” without having to confess it had been here before they were ready for it. I remembered that we brought the pot filler from the warehouse to the house. I remember telling my spouse, “I am going to put the pot filler here and when we think it is lost, we need to remember it is here.” Well, “here” got lost. We considered every possible “here” in the category of “place.” “Here” must have meant we tucked it under the bed in our apartment. Maybe “here” is under the couch. No, “here” must be on that dark, very top shelf of the apartment closet. No, “here” is…WHERE is “here”!? It had traversed well past a senior moment into the ridiculous. It was not even oddly funny. Across our search it passed from worry to persistence to “whatever, it is “here” but we don’t know where “here” is so there you have it, or more specifically, there you don’t have it.” 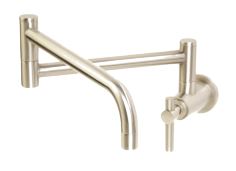 Today I ran into the gentleman who owns the plumbing company in the garage as I was returning from letting the dog out do go pee and he was on the way to his truck to look for a strange little screw of which we had one of two. He politely inquired as to how my day was going. I said, “Well, I hoped you would not ask. We cannot find our pot filler anywhere.” I had to ‘fess up. I knew it was the the moment of truth since the bathrooms are nearly plumbed the kitchen would have to be next. I hoped no one would even remember we were supposed to have a pot filler but that blue plug on the wall near beside the nearly installed stove. It just would not go away. Busted. We were plumbed for a pot filler we could not find.

I actually went to the store and online to see if we could buy a new one and keep it to ourselves that it was not the first one. Instead I had to confess. I tentatively told him we brought it “here” but hid it from him and now we could not find it. He laughed (thankfully). As we were standing there in the garage conversing over a pile of electrical things, I said, “Well it is in a box just about like that one….it is that one!” I had tucked the nondescript cardboard box between the disposal box and the range hood box by their power cords. “Here” was categorized by room type, Kitchen, and not by place, hiding.

Which takes me back to my statistics day. The question I was trying to address was about making categories. What were the minimum number of categories you could have and still not lose information about the things in those categories? My plumbing stuff was hidden in the electrical stuff.

For our pot filler we were thinking category, plumbing when it should have been category, kitchen. The electricians got dragged into the whole sordid affair because they did not care if we tucked a little pot filler in by the big range hood. They like neatly organized piles. Even if they were the ones that found the plumbing in the electrical stuff they would think, “range hood, microwave, pot filler–kitchen.”

We made our categories by places, hiding. Where were the places that hid plumbing parts until they were needed? Our categories included closets, chests, under furniture and on top of things. We never even got close to thinking of the electrical or kitchen categories.

And such is life. When I think about it is amazing how organizing information in one way prohibits us from organizing it in another. Today I found “here” in statistics and plumbing through the lens of electrical in the category of kitchen. Finally I know where “here” is. That is, until I need to remember where the other “here” is.