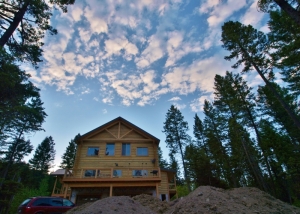 When we arrived home last night after flying in from being with my spouse’s sick Mom in Houston, we expected to see changes that had occurred in the 6 days we were gone but we did not expect to see mounds of dirt. It was pretty cool. The construction pallets that held the log siding were gone. All of the rag-tag pieces of wood and pallets and other things we had built up around the garage entry and the edges of the house to stay afloat in the mud were gone. One pallet remains, looking for all the world like a front stoop since it is covered by a very civilized scrap of plywood.

This morning we awoke the the sound of heavy machinery. We both noticed it since it is Saturday and mostly people don’t work on Saturday. Sometimes people do work on Saturday so we just went on about our morning. We generally try to  stay out of the way of the workers although I know we do get into the way. That in mind, it was around 10 am when I poked my head out the door to apprise the situation. There was dirt. A lot more dirt than had been there the night before. Silly me, I thought someone was moving it around the house, not bringing it to the house.

We had been expecting a few truckloads of dirt as our excavator is working on a house that needed a place to dump dirt. He coordinated his efforts so both they and we benefited. They got their dirt out of the way and we got some dirt to build up the parking area around the garage. Surveying the landscape I surmised that our excavator must be building a VERY large house to need to remove so much dirt.

Part of the reason I poked my head out was to see if anyone wanted me to move the car. I thought they might need better access to moving dirt around but in reality they wanted the car moved so they could put dirt right where the car was sitting. The dump truck driver told me that he was supposed to “fill up that whole area.”

Ever up for a challenge–both the Subaru and I–I backed the Subaru up beside the house and headed in for a landing behind a tree that I thought would remind the dump truck driver to stop should he not notice the car. I had to cross three deep dry-mud ruts and pop over a rise and catch the car before it crested the rise and took off down a ravine. I managed to balance the car precisely where I intended. It was level even on the top. I was not so sure underneath. I crawled down on my hands and knees to see if I had high centered the car. Unfortunately, that was a possible explanation for the car being so level. Thankfully it was not high-centered but a perfect 4 point landing with each of the four wheels on four separate humps. Rock solid.

I patted the Subaru on the rump as I made my doddering way over the humps back across the pallet front stoop to the door of the house. Having accomplished the Subaru salvage, I went back to paperwork left undone this week while in Houston. In the background I was vaguely aware that the equipment sounds were still there.

In the late afternoon I took Sophie out to pee and was confronted by a hillock of dirt so tall that I could not see over it to see what might be going on on the other side. After making my way around it I found that the hillock was surrounded by hillocks. The hillocks had had hillocks and in turn they had more hillocks. We were up to the hilt in hillocks. After surveying the terrain with dismay, I suddenly remembered I had left the Subaru half buried behind a tree in an effort to keep it out of harms way. Was it under a hillock? Was it actuality buried? Phew! I could see white between the branches. I could even see a path to the tree that promised a search and retrieve option for the Subaru.

I went upstairs to work on the floors. I continued to hear the truck come and go, come and go, come and go. I considered texting our contractor to find out if I should be concerned. When we left Houston yesterday, I left my cell phone in the rental car and all of the text messages we usually send back and forth fell, unheard and unread, onto the floor of the 2014 gray Chevy Impala with 1,123 miles on it. Being so inconveniently located, I decided to ignore texting and go back to floor sanding.

A while later I could still hear the truck. It had come in and out dumping its payload with a big whump so many times that even the dog did not blink at the final clattering clap of the tailgate and the whirring whine of the hydraulic lift as it slowly lowered empty trailer gently resting it on the truck bed so it could go off to get more dirt.

I am not quite sure when the truck stopped coming, or how many loads it made. I think it was the same truck all day but I cannot say for sure. I can guess there might be as many as 25 dump truck loads of dirt in my front yard. When my spouse came home from getting the snow tires off the van and doing all manner of errands, we stood on the deck and surveyed the landscape. I had a little flash of Ground Hog day with all the hills of dirt but they were too close together to be made by an animal.

I found a horseshoe in a pile that was deposited close to the house. Being a good Montana girl, even if adopted, I was concerned. I sniffed the air and did not take alarm. I deftly picked up the horseshoe and smelled it. I wanted to make sure I knew where that dirt was coming from. Turned out it was not the barn. The horseshoe was an ornamental one. I did not clean it off but one look at the shape and you know no horse would be shaped like that. It must have been some city slicker’s idea of rustic decor in some house were this dirt lived before.

I will have to find out where this dirt lived before. I want to welcome it properly to its new home.