When we picked the name of the website we intended for it to chronicle our rebuild from the wildfire that consumed our home and our lives in June 2012 but we also intended it to carry forward past the rebuild. We discussed the ongoing aspect of building a home. it is not like building a house which has a start and finish point. Building a home is ongoing. This is the story of our home.

Now that we are five days past the 2nd anniversary of the loss of our home, and we are finally moved into our replacement house I have to ask myself how I should compose my thoughts to continue this blog. We both want to continue the stories but we also don’t want the stories to still be about the fire alone. We are not about the fire alone anymore so our stories should reflect that.

What we are about right now is the drudgery of unpacking when you move. We bought stuff to restock our house when we expected to rebuild in Idaho where our house lost to fire had been. When we retired and moved to Montana, a lot of things got packed away, or never unpacked when they came from the store. Now we are trying to figure out what we have and where to put it. 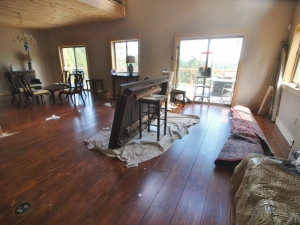 One of the interesting things to me is how fast things get old. You would think that having to replace everything like we did after the fire would mean that everything is new. That is true, in a sense, but some things have a short life expectancy. There are obviously things that are not supposed to stick around like food and toiletries and gas and paper towels. Some things we expect to be around like towels and clothes. What we have discovered is that things wear out faster than we would have guessed. It seems to me that we did not really notice how things wore out and how long it took when we had a house full of things. We replaced stuff on a rotating basis as the need arose. Since everything we have now was new about two years ago we notice what wears out.

Towels. I  never thought about the life expectancy of a towel. When we were young each year when JC Pennies had their annual white sale we got two sets of towels. These got put into rotation and on we went. Thing is, nothing ever went out of rotation. Towels were threads before we stopped using them. I remember drying off and putting holes in the towels when my hand hit a thin spot. The threads hung out and we had to cut them off. When we were invited to a water sports activity and were told to bring a towel, I always looked for a way not to go. Our towels were an embarrassment to me as a child.

Now that I am an adult and I have a grasp of household budgets and the nearly miraculous way my mom kept our household going on such a small amount of money I see those towels differently. We use towels until they start to develop threads which I trim off. Once the whole binding starts to go or the corner is eaten away the towel goes to the rag bin. In the rag bin its life continues for months to a year as it helps keep our house clean.

As we are unpacking I see the towels we have. One set is in near mint condition. That was the set we used for guests. One set is particularly important. I shared our story with Land’s End since I was buying a lot of clothes from their sale bin. I told them about when we evacuated I brought with me a loved nightgown from them. It made it through the wash with a blue pen so the gown is pink with blue tie dye on the back. They loved the story and sent us a wonderful hand written note and a set of towels to help us start our home again. When I see those towels I think of the kindness of people. We have a set of blue towels that were just like a set we had that burned. I bought the replacement set right after the fire because we were do dirty coming back from working at the house site I could not bring myself to use the hotel’s white towels.

Our blue towels are in good shape but showing wear. My new bathroom is in spa colors with a buff that has a dusky mauve undertone. I would like some towels for this new bathroom. I have been thinking mauve would be nice.

I think I will wait a while. Our towels are still whole and there are no thread bare patches. We have a known start point. I can now watch to see how long it takes for towels to disintegrate. Then I will know when to buy new ones.