One of the great things about having history with family and friends is that you don’t have to fill in the blanks. You can start mid-sentence and someone will understand what you are saying. Everyone at the table already knows all the stories you have to tell so unless you have a new ending you can just go on.

I thought about this because I wrote an email the other day to a friend of over twenty years. We used to see each other at the usual gatherings and sometimes at Christmas but we always emailed. When we were younger and the internet was new to all but the seasoned scientists and the spooks, we emailed each other like kids text each other now.

As the years passed and our work went in different directions, we spent less time together and the emails petered out but always, another round pops up and it is as if nothing has changed except for gray hair and html.

What started me thinking on friendships across time was how I wrote the note. I found an interesting scientific article that I was sending as an attachment with a cryptic note. Just as I started to hit send it occurred to me it would be nice to say hello.

I put a short greeting in front because I really did want to know how my friend was but had I sent it off just as it was, attachment and cryptic note, it would have been received the same as it was sent. As an interesting connection between old friends who shared interests and wanted to know more about the world. The fact that a year had passed since the last email would not matter.

My spouse is an historian so I know some about how history is researched so e can learn what happened to people and how they lived their lives even if we lived hundreds or even thousands of years later. Letters are a scarce and precious resource. Sometimes the history is drawn from letters and connecting information such as other letters and documents, deeds, maps, newspaper clippings, reports, census as well as anthropological, geological and increasingly climatological data. Together these things let you paint a picture of the world in which the person lived.

Thinking on the importance of letters, paper or electronic, made me imagine a 30 year conversation between trusted friends with years g 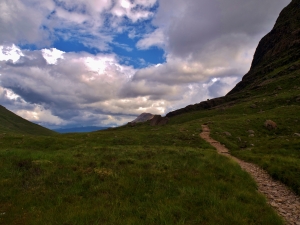 ap in between. From my life’s experience, the relationships that run long can run so deep that time does not ruffle the waters.

We are doing well, we went to the farmers market the other night and really enjoyed it. Enid is getting married in the fall. I will make sure you get your invitation even though I know you won’t be able to make it in person. We painted the house this spring. Seems like I just finished painting it from the last time. Remember? I could not decide what color so emailed you the links. You liked the tan. We painted it tan and really liked it. When we repainted it we decided that the tan had suited for the past 12 years and we did not see any reason to change.

Love to you and Hank. Give Sophie a belly rub for me.

We like the tan. It has been cold here. Not as cold as that time we went camping. Who would have thought it would get to 10 degrees in October! Glad you made us take so many clothes with us.

Love to both of you. Give Sophie a belly rub for me.

I am so sorry to hear that Sophie passed. She was a good girl, one of those once in a lifetime dogs. I know you miss her. We miss Da too. He had been sick for so long it was good for him not to be in pain but we cannot help but miss him. It feels strange to be the senior statesman in the family.

Love to both of you. I will send Sophie’s belly rub to heaven

It is hard for me to believe so much time has passed since we were together. I know it is exhausting for you to travel now. Me too. I wish we could have one more Christmas together. I think back to the old days when the it took so long to fly from here to there. Even thought it is hours shorter than it was, the airports are so crowded and prices seem frightfully high although I suppose that is just me. I still think a Coke should cost 50 cents. It seems a shame that we are growing old before Star Trek could get that transporter on line.

Love to you both

I will be arriving on the 11:54 pm flight. I am sorry it gets in so late, I could not get an earlier flight. Can someone come get me or should I take a taxi? I can stay in a hotel if you want. I can only imagine how crowded the house must be. He was a good man and I am sure people want to see him off well. I can stay as long as you want. That might not be long but if you need me to stay I want to. I can’t imagine what it will be like for you, I am sure you can’t either. After more than a half century together I don’t suppose there is much that won’t be strange.

The news is not good. The cancer has spread and I have decided not to keep on with the chemo. You would think in these modern times that they would have figured out a way to kill cancer without accidentally killing me with it. My funeral plans are in order, of course. You know me. Leave your desk neat and clean in case you get hit by a bus on the way home. It won’t be long, six months maybe. I am not afraid, I have missed my beloved these past years and I think it will be good not to be alone anymore. I know it is a long way to fly but do you think you might come sit with me for a while? I would like that.

I know Da appreciated the time you spent with him before he died. Toward the end he told me that you were one of the strongest threads in his life. Sometimes I think about the fact that you meet more years ago than I am old and it surprises me all over again. I will close with the line from that hymn you both loved: Will the circle stay unbroken, by and by, Lord by and by. Will the circle stay unbroken, in the sky Lord, in the sky. Your circle will never break.

I know we don’t know each other but our parents were very close friends. I wanted to write and let you know of Mom’s passing. I don’t suppose anyone ever let you know she was sick. I would have but did not have any contact information for you until I was going through her things and found the note you sent to her when your father died.

Mom died quietly in the night. That evening we had a bowl of potato soup, watched a movie and went to sleep. She passed over early that morning. I know from the stories she told us that our father liked silly humor like she did. I hope you appreciate the same, my sister and I do. When we were eating the potato soup the night before she died she told me she made it for her mom back in 2005 when her mom was dying of cancer. Mom told us that she actually hated the stuff and it gave her gas. She started laughing and we laughed so hard we almost drowned out the movie.

It has been 50 years since our folks meet and became friends. I always think of their relationship as a testament to friendship and to the connections of the human soul.