Today the builder, the architect and I sat at a big table and talked about what stuff we needed and how we needed to build this or that. I tried to look intelligent but it was hard. I learned how much I don’t know about building a house.

I know about potties. We have had a running joke about potties since 2010 when we remodeled our old house and added an en-suite bedroom. The bathroom was tiny. For that tiny bathroom, I found the most amazing potty ever. I got it 75% off with free 2-day shipping. When people came to the house to visit we would troop downstairs, jam into the tiny bathroom and look at the potty. The bathroom was so small I considered standing in the bathtub for the demonstration. The tall people were always in the hall leaning in to see what was happening. We let the little kids stand close to the potty. After I demonstrated how it flushed and the lid self-closed, I let them flush They would push the button over and over squealing with delight. Big kids wanted to do it but by the time you are an adult you have learned some level of potty behavior and that dictates that you don’t go to a friends house for dinner and flush their potty over and over while there are a bunch of people jammed in the bathroom gazing at the potty.
The whole thing started out because the potty I bought on the first go-round was too big. It was a standard size but when we put it in the not-so-standard sized bathroom you could no longer walk by it get into the bath tub. We decided right off that a draw bridge was out of the question. So, back goes the big potty and off I go to get a smaller one. I did not expect it to be such a difficult task. I checked around town and came up dry.

I looked on the internet and found things like a $12,000 gold plated toilet (seriously, you could buy one). I found long potties, I found round ones and elongated ones. I found wall-mount and I found floor mount. I found those with rubber seals that depend on gravity and I found those that used pressure to flush and had no rubber seal. I found out so much about potties I did not even want one! I looked at thousands of potties. I could not find one that (a) was not ugly or (b) I could afford. Finally I decided to get the ugly one and forget it. Then, I hit on the golden search term. The doors to the kingdom flew opened and there I stood gazing at 15 options. I could hardly believe it. I finally chose one that was supposed to be the best selling toilet in New Zealand. The toilet had a self-closing lid. It had two flush options. The small option used only a liter and a half of water. It was sealed to make it easy to clean. It was the perfect potty since it was (a) not ugly and (b) I could afford it.

The potty arrived on a big truck packaged on a wooden flat. The driver of the truck did not know what he was delivering since the package was completely closed. He knew it was heavy. I was worried that it would break. He got it into the garage and went off. I started trying to remove the packaging and was overcome with how difficult it was. I finally ripped a small hole in the elaborate packaging and it was, indeed, a potty.

It fit perfectly in the bathroom.

It was one of those newfangled pressure toilets that does not use a wax ring. It brought us all to our knees in distress trying to figure out how to install it. Finally, we got it. My friend who installed it called me at work and said that I should check on it when I got home. There had been a small leak but that he thought it would resolve but better safe than sorry.

Well, I got home and the small leak was more than small. It was Potty Pond. I mopped it up and went on with my evening. The next day we checked again. I have a friend whose spouse works for fish and game and I thought I should ask if her husband could come and stock the pond. We could charge $3.00 to go fishing. The next day my friend who was working on the potty called and jubilantly announced that we did not need fish. He had figured out how to fix the leak. He asked me to check to see that it was still dry when I got home. I went with some trepidation and sure enough we did not need any fish.

So, the potty is famous. I have no idea how long the potty will stay famous since it has now passed from this life in the fire. I do have the email receipt for the purchase. I think I shall buy a new one for the new house. It will be a nice transitional object from the ashes of our old life to our brave new life. This time I will put the potty in a larger bathroom so all of our guests can fit in comfortably when they come for the potty flushing and lid-closing demonstration. 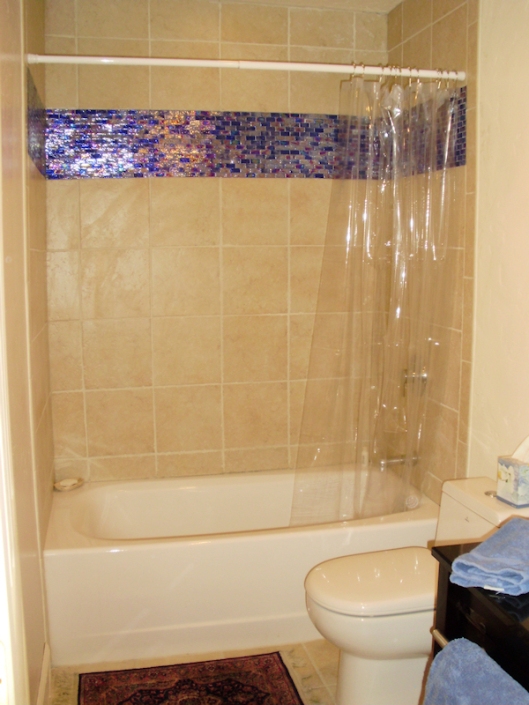 My potty was just the right size to allow for easy access to the bathtub which had the awful plastic curtain awaiting the installation of the new glass tub door.

Our potty, front and center. Notice the lovely footstool we were using for a TP holder. I suppose the fire rescued me from having to complete this bathroom.