being cared for, control, help

Twice today people said to me, “You have such a great attitude about it.” I always smile about that. Our attitudes are about the only thing we do have control over these days and even that is small control.

Having control over things is illusary anyway. “Do you need some help?” “No, I have it under control.” “I don’t know how you control yourself when your boss is so mean.” “If you just had self control, you could do this.” “You are so controlling.” “I want to be in control of my own life.”

In reality, we are never in control of our own lives. People wrest control from us routinely even throughout the course of a single day. “You look tired, let me help you with that.” “I know you are putting in extra hours at work, I will pick your kids up when I get mine this afternoon and take them all out for supper.” “I can do that for you. I am happy to do it.”

Of course there are times when others’ attempts at controlling you are nefarious at best and abuse at worst. That is wrong. At the end of this blog is a list of resources for help in dealing with inappropriate control.

The control that I felt exerted toward us today was of the kindest sort. Each person that I talked with wanted to know our story, they wanted to know that we were OK. They wanted to help. At the beginning of the day I was stressed and worried about money and about procedures and the weather and time and all of the things that are part of our daily life as we proceed with the life we would have had without the fire and on top of that add the consequences of the fire. Last night I told myself that I would organize my lists and take control of the situation so I would not feel so stressed.

I have learned the novelist mean when they write, “She squared her shoulders and went forward. . . ” I discovered that a few weeks back when without conscious though, I stood up, squared my shoulders and took courage. I don’t know why I noticed it but I did, literally, square my shoulders. Since then I have watched for it in myself and in others. From what I have seen, I am not the only one who does it.

So, today I squared my shoulders and then checked my facts and my lists before I dove into the day. My spouse had left to teach classes so I had the house to myself along with my boon companion Sophie the dog. She helpfully slept under my desk exuding canine courage.

I did not need courage. I needed to be able to receive help, support, good wishes, keeping of promises and great kindness from others. It took me a bit by surprise. I was feeling cheerful after the first few calls when I took a tea break but I had not really processed what was happening. During my first post-tea break call I realized I was trying to politely press my case when the other person was immediately cognizant of what was important and they had already pledged their attention and assistance to my problem.

As the day continued I truly enjoyed visiting with people. I put my problem into their hands and let them take control and take me where they thought I should go. I was interested in the fact that people summarized to me what I had said to them and then asked clarifying questions. As I reflect on it now I am impressed at the accuracy of their summaries and of the pertinence of the questions I was asked.

It is easy to be cynical about the world since there is so much going on at any moment but it is good to have the experience of one interaction in one moment. In that moment you can feel cared for. You have given others control and in that moment you find freedom. 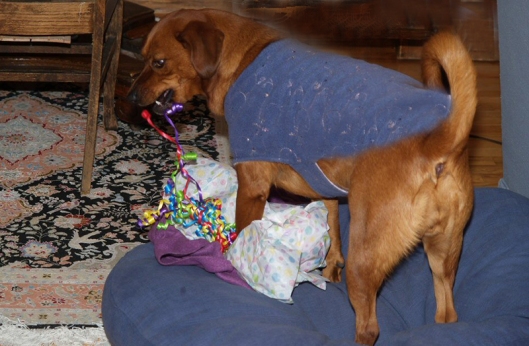 Today I felt like Sophie on her 2nd birthday when she tried to unwrap this present. Inside of the paper was “pink dog” who became a good friend. The paper, however, was surprising and she was not sure if she was unwrapping something good or getting into a confrontation with something she did not understand. My day was like unwrapping presents and learning that the wrapping was not something to worry about.

No matter what you are dealing with or how much emotional pain you feel, there is help out there. It might not be easy to ask for, and your problems won’t magically go away, but in time, things will get better. If you or someone you know is considering suicide talk with someone who can help at the National Suicide Prevention Hotline 1-800-SUICIDE or 1-800-273-TALK. There are more hotlines, including ones for family violence, sexual assault and child abuse listed at StopFamilyViolence.org