When I headed out about noon there was more than a half a foot of new snow. It has been a while since the plow had been by on the main roads. It had been snowing so hard that they had not made it at all on the road where our temporary house is or up the road to our house either. My spouse need the car to go to town to meet with students so I had about an hour to get to the house, hang the wreath and get back. It is not far but the roads decreed that extra time was in order.

Sophie and I went in our new-to-us old white trusty Subaru. Very slowly with sure feet we made it down to the highway from our temporary home and then the three miles to reach the turn to our old house. The trip is like the letter U. Our temporary house is one ridge closer to town than our old house. You cannot see one from the other because they are both just below the top of their respective ridges on the south side. If you had Superman vision and could see through the rock and dirt, you could look from one deck to the next.

I came around the curve at out house and I was pleased to stop driving. When I had headed up the hill on our road I was not sure what would come of that part of the journey. It was dicey for a while and I did some serious mental preparations for defensive maneuvers. I had picked out my bail out point on that spot on our road years ago. It is not like the new-to-us old Subaru is missing something the old one knew. Both they and I knew that was a tricky spot. Slow and steady, keep your eyes on the road, no, white knuckles don’t help. Breathing does help. Easy, focus….YEA!

Sophie was excited. When we leave the house she is interested in what is happening but when we get to the highway and I turn toward the old house she starts wiggling her tail and then she stands like a masthead as if staring it down would make the highway cave under her power and we could instantly be at our road. It is wonderful to see her happy when we go to the old house. When we got there she hopped out of the car and snuffled around a happy dog.

As I wrote yesterday in I’ll Be Home for Christmas, I had planned to find, here in the winder, a garden hose holder and hammer it into the ground to put the wreath on. I think I found one in town but the roads were so bad I did not feel like traipsing nearly 25 miles round trip to find out. I found an unused shower curtain rod we had bought that did not fit. I pulled the caps off and thought I could drive it into the ground and hand the wreath on that. Well, good idea but nada. I did discover that one of the silt fence post made a perfect spot for the wreath. Lots of duct tape and we were in business.

As not uncommon for us when we work in the yard, I had tied Sophie to me with a 40 ft lead. I felt a tug on the line and looked over and she had walked down the side of the hill, off the driveway, to the ledge between the driveway and the road. It seemed that she had never discovered that place. She was looking interested and curious both. I don’t think she ever went down there before. The deer walked to one side of it but not up the ledge. It is a great piece of real estate we did not even know what there. The trees that were there had been there for many, many years. It was steep going down to the road and I just never thought about it. I knew there was a shift in the landscape headed to the road but never knew it was so big. When the spring comes we will build a path with a garden down there so we can hold up the slope and enjoy the space. 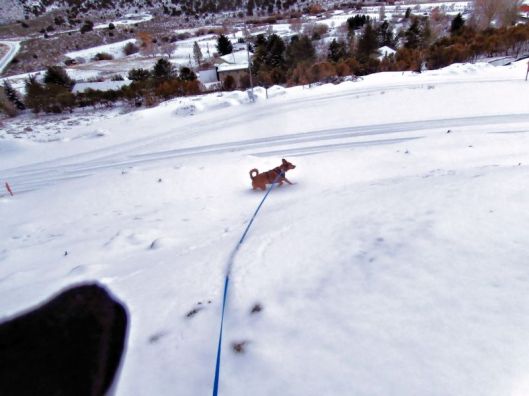 We had fun playing at the house like we always do. It makes me really happy to know that there is still fun there and that we have the ability to find it.

I found something today that I had not expected to see. I don’t know if I even knew to look for it. I imagine had I thought about it I would have said it would be when we finished building the new house and putting in the landscaping to restore the land. I was wrong. I found it today.

I expected to see the land and the remains of the driveway and the hill behind. What I saw what a normal place that just happened to have its house gone. It was as if the house had gone on a walk-about and would be back in the spring. The feeling of “gone-ness” was not there. To say I was surprised would be to put it mildly. To say I was pleased would be to understate it.

I was glad I had brought a wreath to this place. It was right to bring some Christmas. The care that it took to get there was as naught when compared to what the land told me today.

In the past I had to reach hard for a vision of what could be as I stood on the burned ground of what was. Today the land showed me that you can see what it is as it has regathered its self after the fire. It is whole and healthy. It is a normal place is simply waiting for its house to come back.