Today we celebrated at dinner. We called family and we ate steak. We are getting our house.

We even shared our excitement with the cashier at the grocery store when we bought supplies for our celebration dinner. Everyone was overjoyed. We wanted to be the first to put out there that this might crash and burn like several other attempts had and that this celebration might be premature. Our family reminded us that we needed to celebrate steps toward a new home even if the steps were a bit wobbly.

Today everyone is working fast. We have a plan that is almost off to the engineers and we have found a contractor and had a happy meeting and a solid handshake. We have a target budget that will help keep us where we want to be with our mortgage.

It feels like we are on solid ground. We even have a timetable. If things go smoothly, or if they are bumpy but not rocky, we should be ready to break ground as soon as the ground breaks up from the winter frost. From there if things go as we hope, we will be home in 6 months.

Said like that–that we can be home in 6 months–it seems very fast. In reality, if we are very lucky, we will not have to be in this temporary house for a whole year. I think that would break my heart. We do have approval from the insurance company to be here for a year and a month. If we have to, we can extend it past that point within the scope of our insurance policy but I don’t know how I could bear it.

If things go incredibly well, we still won’t be home when the 1 year anniversary of the fire comes on June 28, 2013. Our builder thinks that we can be home soon after that, within a month or so, but we will not have the victory of being back home before the day and a year from when our home burned. I think we can go sit somewhere in the shell of the house and look out. We may not have all the walls but we will have a lot of them. Perhaps we can have a barbeque for friends and the people who are working on the house. That would be nice. It would be a nice way to sanctify the day and bless the house.

Because of working on the house and the insurance claims I find that I am frequently digging through photographs of our now deceased house. We have a whole set of them organized by room. I took them in 2010 when we did the big remodel. I had sent photos to family as things came along so they could follow our progress. When everything was back in place, I took photos bottom to top of the house and organized them into an electronic photo album. I use it now as the key for the insurance personal property claim and for figuring out things about the house we have forgotten. One day when we were at my spouse’s mom’s house I was sitting on the couch with my laptop digging through the digital photos and working on the inventory. She said, “Does that bother you, looking at the pictures?” I said thoughtfully, “No. I don’t think so. It was my house and I liked it and liked the stuff that was in it.” We both took a moment to think about that. Later a time came when I could not look at the photos and did a lot of things to avoid looking at them. I would quickly open a web page when a directory full of photos came up.

Now days I can look and sometimes it makes me sad but mostly it reminds me of things that lived with us, things that we liked. I see messes that we made that show up behind the subject of the focus of the camera. It is like being an accidental tourist on a “behind the scenes” excursion of our home.

Night before last I was editing photos of roses that I had taken in 2010. When I took the photos I was experimenting with different types of lighting and had taken a boatload of photos. What I did not see then but saw night before last were the things in the background. On one of our good antique chairs I had dropped a dog lead. My niece had tossed a sweater, my spouse keys and and someone a nylon lunchbox. Behind the chair you could see into the open door of one of the bedrooms. There were some clothes on the floor and a book had fallen off of the nightstand. The lamp shade was a bit a skew. In another photo there are family lined up on the couch, sock feet on the coffee table, with computers in their laps. I took the photo from the top of the stairs and it is really cute. What I did not see then were the extra shoes, a stray sock, drinking glasses, the instructions to a new board game and a plant with some dead leaves on it. When I saw these photos the other night, my immediate response was push them aside because they were untidy. My more thoughtful response was that they were real. They were about times when we lived in that house that was consumed by the hungry fire. They are reminders that life is messy and that it is OK. If you look at the people in couch photo, not the stray socks, everyone is lined up with laptops in their laps but you notice that they pointing to things telling each other about something they found. It was a time of sharing and a time of learning. The socks did not matter.

As I continued working on the rose photographs, I found in the background exposed by the harsh flash of camera lights parts of our collection of Early American and Native American things. That gave me pause. It makes me sad since some of those things were nearly 200 years old. I had a collection of female Seminole Indian dolls that started when my dad bought me one before I went to the first grade and I added to as we found antique ones we could afford. Since the fire we had debated  how many of “my girls” resided on that shelf. When I pulled up the photo of the roses I could count. 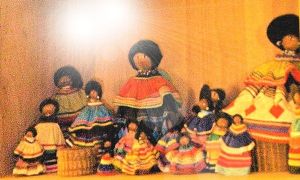 It may be hard to learn to live in our own house but without things that were ours. Even so, we will have a house and it will be good to be home.

1 thought on “It Will be Good to Be Home”