To the best of my ability to understand the professional language of a profession of which I am not, this is not wrong.

I feel like I am a fish out of water a lot these days. I get asked questions and am offered options and told things to which I need to respond all with the assumption that I understand what I am agreeing or not agreeing to. The big problem is that I understand enough to have the general conversation but when things show up line item on a bid or invoice I have to take it on faith that I got it right.

One of the big dramas in building this house has been the HVAC; the heating, ventilation, and air conditioning system. There are all sorts of local, state and federal tax rebates and tax credits that apply to multiple types of systems. For example, geothermal heat pumps have a 30% tax credit which brings their costs within shouting range of a standard heat pump. Then there is the one for high efficiency furnaces not to be confused with a high velocity heat pump.There are mini-split systems and not split systems (which I think are just called systems). You can have cadets or ceiling cassettes. You can have radiant from below or above, water, quartz, hot oil or hot air.

I thought I had them all sorted out in my mind, all the way from the air handlers to the vent covers and then I got tossed a curve ball to which I could only say, “didn’t see that one coming.”

When we were discussing the HVAC system we have selected standing in a frigidly cold house with doors and windows but no insulation or heat, the gentleman from the HVAC company said, “and we will have all those refrigeration lines well insulated.” My mind was spinning. Not only were we contemplating suspending the HVAC system in the ceiling and running the paths from the top to the bottom of the house rather than the bottom to the top, we now wanted to refrigerate things? I knew that refrigerant did not only mean cold but as cold as I was that was all I could grasp. 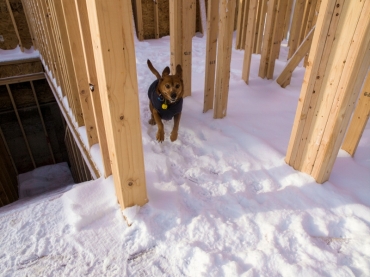 So tonight when I was asked to verify the paperwork for our new HVAC all I could do was think of the fact that it is below zero here right now and the guy wants me to refrigerate in my house. In the “Back to Nature” days of the 1970s my spouse’s siblings lived in New England in a rather spartan house. They put the butter in the refrigerator so it would not freeze sitting out. I thought of how that butter must have felt and had profound empathy for it.

Seriously, we like our HVAC person very much and are intrigued by the system he has designed for us. We wanted to do something very green like geotheral but it has limitations for us that made it less attractive. Geothermal heating, as well as tankless hot water heaters are stuck with trying to deal with very cold ground water and often requires additional energy use to make things “warm” for household use. that alone was not a deal breaker but knowing that we would probably have to break through rock to get lines in was.

We looked at high-velocity systems. These systems push air though a small vent about the size of a car vent rather than the large rectangular vents that most forced air heating systems have. One of the truly great benefits of the high-velocity systems is that the vents needed are so much smaller. The problem with the high-velocity system from our perspective was that there were so many vents necessary and all of them blowing air all of the time makes a strange sound to us. It is like white noise but not exactly. Also it looks like the jury is out on how efficient the high-velocity systems are. They do not have high SEER ratings which is a measure of efficiency. However, it may be that they simply have not been on the SEER radar screen enough to be considered acceptable to tax rebates and the like.

After taking Geothermal and high-velocity heat pumps off the list ($30,000 + and $20,000 + respectively), we thought we would go with a cheaper alternative and just get a high efficiency furnace. We hoped we could do that for $12,000 to $15,000. It was not exciting on the eco-green front but maybe our only feasible option on the bank-green front.

Enter our current HVAC person and his cool ideas. We are going to be getting  a single stage outdoor heat pump and an indoor variable speed air handler for $15,367. It took me a long time to come to the point that I think I understand what that means.

Many of the new systems run all the time rather than cycle on and off which uses more energy since it is playing catch up with the thermostat. Some of the newer technology has a variable speed air handlers so that it automatically adjusts the air flow based on the amount of heat (or air conditioning) needed to maintain homeostasis.

This concept of constancy rather than on and off is difficult for us to understand. We are struggling to take in that that having the house warm though the day and night hours is cheaper than turning down the heat in the evenings and night. We have been encouraged to use room-based heat sources so we can have spots where we are warmer. This suits us fine. In our house that burned, in the evenings we would close the den door, turn the furnace up when we began cooking dinner and then turn the furnace back down when we finished cooking. We took our dinner to the den where we could be warm. The smaller room with a closed door kept the heat nicely until bedtime. By the morning it was uninvitingly cold it was hard to make yourself get to the bathtub so you could take a shower so you could warm up. Having axillary heating in areas we use more than others just makes sense.

So our new house will, after all, take advantage of new and green technology. I think. To the best of my ability to understand the professional language of a profession of which I am not, this is not wrong.