Exhaustion reigns tonight. It is actually two and a half hour after yesterday. There was so much going on today I could not get to the blog for today until tomorrow. It is way past lights-out time and all that can be heard, in unison, from dog and humans is, “uhhh. ooh. uff, woooo, uew. Uhhhh, oooow.” Every move hurts. Just lying still hurts.

We were up early to dive into a busy day. Our time in the ski-condo has come to an end since the skiers need it back. We had to move once again. We spent last night at the same hotel in a neighboring town where we stayed in January.  Thankfully the skiers were arriving late since we still had several loads of stuff left and the great room waited to be cleaned. My spouse, as always, was up before I. He brought me coffee and announced that we had to wait a while. There had been ice overnight and the streets were treacherous. We needed to wait for it to warm up a bit.

Over a nice big breakfast we discussed the changes over the years in the structure of basketball scores, that teams scoring in the 100 plus range, common in our youth rarely happened any more. We discussed doping. We discussed walk-ons to college sports teams. We discussed good and bad coaches we had known through our students over the years. Our dog wanted to discuss the bacon we had for breakfast. She was rewarded for her interest in sports by a small bit of bacon.

When the roads cleared about 9 we headed out to finish moving and to go put the kitchen together for our new basement apartment. The Subaru continued to amaze at all it would eat. Today there were two chests of drawers, a 50 gallon tote, 6 pillows, one down comforter, a duvet cover and shams, a set of sheets, one heated blanket, 2 sets of towels, three ski poles and one hiking pole, a down sleeping bag, three dog beds, 4 Waterford water goblet and a bunch of other small stuff. The car was so stuffed Sophie had to sit in the front. We usually don’t let her ride in the front because of the airbag. She qualifies to be safe from the weight perspective but I don’t know how safe an airbag is on a dog snout compared to a human’s snout.

Most dogs would think it special to get to sit in the front even if they did have to wear a seat belt. Not Sophie. She turned and looked back to see if she could look out her regular window. When she failed at that she settled in, looked out the front passenger window and went, “huuu….huuu…huuu” all the way to our town and then up to the house. Twenty five miles of “huuu,” with barely melted ice grated on my nerves.

With the last load loaded and the condo was moved to the warehouse and the great room cleaned, we started to the house to do our kitchen-install chores. I stopped by drive-through Cowgirl Coffee and got a skinny latte. Reading the handwriting on the wall, I asked about any food they might have left from the morning hoping for a bagel at best. They kindly made a breakfast burrito for me at 2 pm. Shortly thereafter my spouse dropped by Cowgirl Coffee and they said, “Hey, you wife was just here.” We like small towns. Except they did not tell him he could have  breakfast buretto so he just made a latte lunch.

When we got to the house we found out we could actually start moving our things in. The plumbing should be finished Friday and the electricity on Monday. We can move on Tuesday baring another 25 below zero temperature spell  like week before last. That cold just brings work to a halt. Running on enthusiasm, by 3 pm I had gotten through vacuuming construction dust from about half of our 390 sq ft apartment. I had to clean the shop vac’s filter three times because it was so dusty from dry wall, tile and saw-dust.

Soon the day was over for the majority of workers and the house became very quite. The person doing our shower tile was still there and the three of us labored under our appointed tasks. At about 9 pm he packed it in for the day. We were still there.

We had all sorts of technical difficulties with the kitchen including the locations of studs in relationship to where we needed a stud for proper attachment of cabinet. Once we surmounted that problem we proceeded to cut very badly the laminate counter top. It was a cake you kept going back to even it off. Of course, each time we evened off one end the other end was not even. Eventually we ended up cutting the length of the counter almost 2 inches shorter than planned. That too we figured out how to deal with.

We got the wall cabinet hung but it was not plumb having been dragged from the store to the condo garage where it got moved repeatedly as building things rotated in and out. The final move, or blow, depending on the perspective, was being crammed into a car and taken up a bumpy mountain road. The best we could do was shim it and live with the tiny pizza shape that follows the wall from the top to the bottom of the cabinet. The wall is plumb. The cabinet is level. That is about the best we could hope for.

The base cabinet was too short since we needed a bit of extra height to get the portable dishwasher semi permanently installed. Building up the counter from the cabinet left too big a gap and not enough room for the feet that were to hold the cabinet up higher for the dishwasher. We ended up putting two nicely cut pieces of 2 x 4 under the cabinet arranged so it fit like furniture. We could paint it the same color a the cabinet and with feet it would look like the kitchen furniture it was designed to be. I even sanded it with 400 grit sandpaper to give it a nice smooth finish. Connecting a 2 x 4 to a particle board base under the counter was problematic. I finally went for the gold and used Liquid Nails. God forbid that we ever want to remodel. We will pull the entire back foundation wall out.

About 8 pm we could tell things were not going to wrap up soon. I found a half eaten ziplock bag of nuts and half of my latte in the car. I found a dinner-size bag of dog food too. Sophie got her dinner and we feasted on the leftover nuts and the cold latte. By midnight we had thing done a well as we could (not professionally!) and packed it in to drive the 25 miles back to the hotel where my spouse and I ate first dinner and Sophie got second dinner.

The kitchen actually will look good when all of the things are finished. I pointed out that we could invite people not to look at the edge of the too short counter or the wildly-wavy cuts for the drop-in sink. Anyone who wants to be that picky can eat from someone else’s kitchen.

So one more move behind us, one more hotel stay and the promise of the next stop being our own tiny apartment in our own house. Even with wobbly-cut kitchen counters and out of square cabinets it will be our place. We will be glad to be home. The 19 months since the fire have been exhausting. We will sleep well when we are in our own bed. 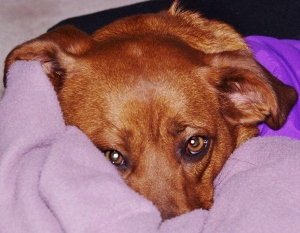