This is my 399th entry since July of 2012. Of all of the stories the most hits are to The It Had to Happen: The Dreaded Coffee Stain in which I shared the story of our story of not only getting new things to replace all of our house hold goods which were consigned to the wildfire that completely burned our home but of them becoming not-new.

The story is about a silk down comforter that we found to replace the one we had. We loved the one we had. I happened to find it on sale nearly 15 years ago. I don’t remember how much it was but it seemed like a lot of money even 75% off. Over the years it served us well in the cold Idaho winters. Over the years it collected many things, the coffee split while reading in bed, the dropped pens when grading papers, the poor sick doggie tummy contents, mud from hiking boots, being part of the loop of the “spin cycle” Sophie the dog after a bath when she races around trying to regather her dignity, baby spit-up, suitcases packed and unpacked, and girl’s family gatherings for fashion shows of “what should I wear for this upcoming event.”

Losing everything that we owned other than what we had in the van with us when we left was difficult. Sometimes it still is. Some things we miss more than others. That comforter was one of the most missed items. Through online sleuthing I discovered what brand it was but could never find one exactly like it. I was able to find one that was cotton and silk with down which is the we have now.

It is now concluding its second winter season, and its second coffee bath.

We sometimes eat meals sitting in our tiny bedroom/library/office because there is only one window in our apartment and it is in that room. There is room for one chair at the desk as long as the occupant has the chair pulled up to the desk and no one wants to get by. The occupant has to wriggle a little to get into and out of the chair. When the office transforms back to the bedroom at night the chair i folded and put in the living room where it is out of the way of bare toes making necessary trips in the night.

So, in the morning, we enjoy a cup of coffee, a dog belly rub, the paper, some cereal, and this blog gets read aloud. This morning while I was waiting for my spouse and the dog to return from her morning business, I puffed the duvet to knock some of the mud particles that plague us these days without considering what the puffing duvet would do to the full cup of coffee in my hand. Now, it is entirely predictable but retrospective prediction is entirely unhelpful. I got a lap full of coffee and my lap was composed of the down comforter covered by the duvet which duly covered my legs.

I had a great pool of coffee in my lap. I looked like one of the gravel pits around here that had to have water pumped out of them so they could dig out the gravel. As quickly as I could I started dipping the pool of coffee back into my cup. That was going swimmingly well actually. The coffee pooled on the duvet cover rather than seeping immediately through. For a nanosecond I thought I would just look at the phenomenon but realized quick action was more useful. I looked to the dresser jammed between the wall and my bed and saw a roll of shop towels. We have them everywhere. Between living in a construction zone and mud season there is always a mess. I unraveled a big pile and things came round right.

Later today I thought I should investigate the damage under the duvet which is a black print so survived pretty well. The damage was a lot worse than I thought it would be. The dreaded coffee stain again. This time rather than it happening in a 6000 sq ft house we had to deal with the comforter in a house where it spans from one side of the bedroom to the other on the width of the room and nearly as far on the length of the room. The sink was wholly unsuccessful. My spouse trudged to town and went to the laundromat where we have been going these past weeks.

Big down comforters take big time to dry. He stayed at the laundromat with it in the dryer until dinner time and finally just came home.

We have a cold wet goose for a bedfellow tonight. The cold wet goose is now laid to rest the night upstairs in the construction zone in a room that is less active than the others. Tomorrow it will find its way to a less used porch corner (we don’t have rails yet) and lie in the sun.

It is still winter and the way our apartment is set up the mini split heat pump does not pump much heat into the bedroom. A hot night tops out at 62. Most nights are in the 50s. A sheet and an empty duvet cover would not cover it, so to speak. We have always been the adventuresome type but sine the fire and losing so many hings we used to take for granted, we have  learned to be even more creative. We both checked our sleeping attire.

I took on the bed. We still have a twin size heated blanket but it is only heated in the middle where the dog likes to sleep so only she will benefit from that warmth. I have a gigantic pink fleece robe which went down next. Following the robe were the jackets and vests. Then an unused curtain that happened to be in the room was neatly tucked in. I added a couch thro 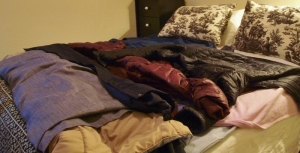 w and then put the duvet cover over the assortment. I expect it will sleep quite well.

The important thing for us is the knowledge that we have stuff this is old enough to be “ruined” not once, but twice. We have stuff that seems old and stuff that sees new. The old stuff is what we have not seen since August last year. It has been warehoused since then. The new stuff has arrived in the past couple of months and is for this house of ours. We look forward to getting our stuff from the warehouse since it will seem to be of our past. Occasionally we confabulate the old, newly purchased items with things we owned before the fire. Lately we find ourselves asking each other if X thing is in the warehouse or did we have that before the fire.

There is a spooky quality to having to fish through facts in one’s mind to determine if you own or owned someting. Is lost to the warehouse or is it lost to the hungry fire that consumed ours and 65 of our neighbor’s houses?

When we move upstairs into this newly finished house it will be interesting to unpack all of the boxes and see what feels new what feel familiar has not been with us and what feels truly gone, eaten by the fire. I suspect there will be some grieving for the lost things when we try to unpack our new life. I know there will be happy reunions for the things in the warehouse.