Here it is, post number 400. I am not sure why that seems like an important milestone but right now it does. I cannot understand why 300 did not seem such a big deal and when I think of reaching 500 which is a traditional milestone like 100 and 1,000 it seems too remote to even understand what it might mean.

I had planned to write most days since the fire but missed several months in the fall of 2013. That was when we were changing from living in Idaho

to Montana and maybe writing about such momentous change when we initiated it rather than when we experienced it like the fire was not appealing.

I thought about writing, I intended to write. I even composed stories in my mind but for months did not write a single story.

If I had written a story each day since I started the blog in July, 2012, I would be commenting on blog number 650 something. That seems an impossible goal. I know that some people write in their blog each and every day but sometimes I just want to go to bed and go to sleep. Sometimes writing keeps me up much later than I intended or wanted. Sometimes writing keeps me company when I am up way later than I wanted.

I like writing. I have edited several books and for nearly 20 years wrote grants or grant reports–usually both–continuously. The worst year I wrote 25 grant applications. Our research institute was tanking and we needed to find money or close. I found money. As years passed the money hunt became harder because across the country research grant money was reduced and as budgets at universities were reduced faculty were pressed harder and harder to compete for grants to fund floundering departments and fund positions that previously were university funded. At our institute it was also easier from the perspective of having more colleagues to share the grant-winning with.

I grew up in entrepreneurial family. My spouse had entrepreneurs in his too. His grandfather owned several businesses. My grandfather owned several businesses, three of them at the same time when I was young. My mother opened hiking and canoeing store in 1976. At the time backpacking was relatively unknown and a woman owning a sporting goods store was nearly unfathomable. I don’t know how many female owned hiking stores but probably not a lot. We always heard that she was one of three but that might have been an apocryphal story. All of them knew what it was to be doing well and to know when things were failing.

I have always thought of working on research grant funding required the same sills and tenacity that it takes to be an entrepreneur. You have to stand firm in your own vision and show it to the world in such a way that the world not only understands your ideas but wants to share them. For the entrepreneur sales and profit emerge. For a grant funded scientist winning a grant means that you have shown your peers what you think might be. In the best of business you create create jobs and add to the economy. In science, your vision, or some offspring of it, yields scientific knowledge.

My friends and colleagues would roll their eyes to hear me expound on this theory as I have so often in the past. Tonight I am thinking of it for an entirely different reason. I am thinking of how it brought us tools to survive the fire with less distress than many who have experienced similar things. 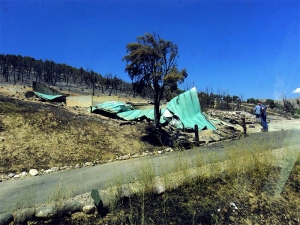 Our House that died in the Charlotte-Mink Creek wildfire. This photo made its way around the internet to show the damage caused by the fire.

People talk of my spouse and me being resilient. We are often told that we have amazingly good attitudes given the terrible thing that happened to us. Sometimes people tell us that we show them that you can overcome adversity. One of my least favorites is that we have such good attitudes and, “you see, there is always a silver linking.” 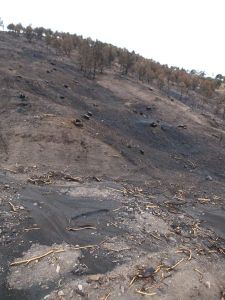 not see a silver lining when the rains came on top of the fire damage and I watched the hillsides of fragile earth roll toward the lowest point taking with it any hope of vegetation for the coming year or even years. I don’t think there was a silver linking for the children who were traumatized and will grow to adulthood carrying with them the pain they felt from the fire when they were young.

I do think that people can be resilient. I do think that exposure to traumatic events forces us to learn new things, some of which can be life-changing in good ways. Like others facing trauma-induced change, the fire made us change, we did not choose to change.

This is what I am thinking tonight. From two generations of people on both sides of our families having succeeded and failed with business ventures and from that pressure-cooker year of writing 25 grants and being pleased be awarded 4–we learned that failing to win a grant or failing to enchant others with your business ideas is something you fold into who you are. The fire is now folded into us.

I won’t truly speculate on whether we folded the fire into us or the fire folded us into it. My guess is that both happened. Regardless, we have changed and are changed. This 400th post exists because of the fire. It made me choose to change by writing thousands of words here here in this blog.

The fire demanded that we change and we have.This is our life now and this is who we are at this 400th post.